Pink Shirt Day is February 27, 2013 and we’re proud to be supporters of this great cause. This year we took it one step further and some of our stores created videos showing their support.
We loved the creativity and the fun as well as the great message. Great job everyone!

END_OF_DOCUMENT_TOKEN_TO_BE_REPLACED

Comments: Comments Off on London Drugs employees have some fun while taking a stand against bullying 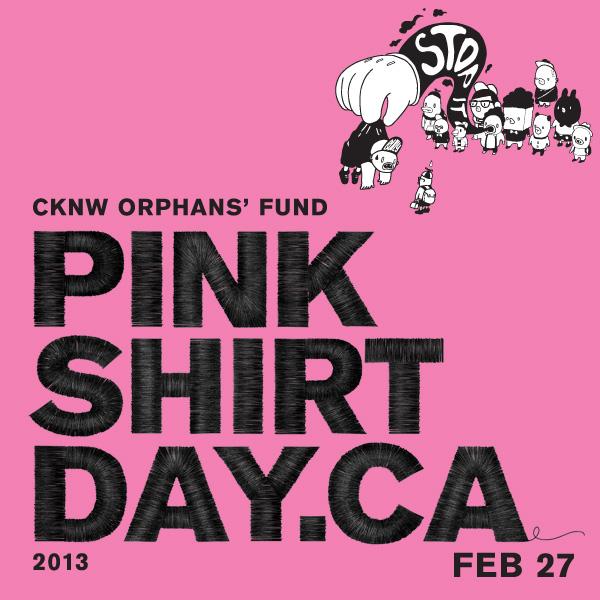 London Drugs is excited to announce that we’ve partnered with CKNW’s Orphan’s Fund once again, for the 6th Annual Pink Shirt Day nation-wide on Wednesday February 27th. We are a proud supporter of the powerful Pink Shirt Day campaign, with the official anti-bullying Pink Shirt Day T-shirts available at all London Drugs locations. Net proceeds from the sale of Pink T-Shirts benefit the CKNW Orphan’s Fund and Boys and Girls Clubs across Western Canada.

END_OF_DOCUMENT_TOKEN_TO_BE_REPLACED

Comments: Comments Off on Pink Shirt Day is February 27 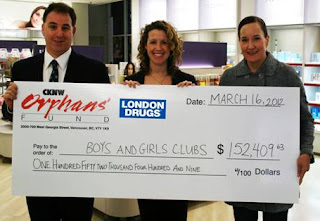 Hundreds of thousands of Pink Shirt Day supporters across Canada donned their pink and committed to a bully free life on February 29th 2012 for the annual CKNW Pink Shirt Day campaign. In this 5th year of the Pink Shirt Day campaign, CKNW News Talk980 and the CKNW Orphans’ Fund sold 60,000 pink t-shirts and raised over $150,000 to support the Boys & Girls Clubs anti-bullying programs (picture included below).

“In 2007 when the campaign began at CKNW, a few hundred t-shirts were sold in support of Pink Shirt Day. We are thrilled to see this campaign grow to over 60,000 in 2012. Not only are we committed to raising money for organizations supporting anti-bullying, we are also focused on bringing about greater education and awareness to what bullying is,” said Tom Plasteras, Program Director for CKNW.

In the month of February, CKNW ran more than ten different segments focused on topics such as workplace bullying, school bullying, cyber bullying and how this type of behavior negatively impacts its victims. “We will continue to use our radio station and the CKNW Orphans’ Fund to bring much needed information to the public on this issue year round,” Plasteras added.

Pink Shirt Day T-Shirts were sold both online at PinkShirtDay.ca and through London Drugs retail outlets in Western Canada. To date, the CKNW Orphans’ Fund and radio station CKNW have raised over $375,000 for the Boys & Girls Clubs in support of their anti-bullying programs.

“The Boys and Girls Clubs are grateful for the support from the CKNW Orphans’ Fund through the Pink Shirt Day Campaign, which is critical to helping us ensure that each and every one of the 10,000 children, youth and their families we serve annually have opportunity to participate in our programs,” said Carolyn Tuckwell, CEO of Boys & Girls Clubs of South Coast BC. “A key element of our program is to develop healthy, positive relationships, and BGC’s anti-bullying programs are the cornerstone of that learning”.

Five years ago, two grade twelve boys from Nova Scotia stood up for a younger boy who was being bullied for wearing the colour pink. They encouraged their schoolmates to wear pink and send a message against bullying. CKNW heard of the story and started running editorial dedicated to anti-bullying. Over time, this became a movement. Its goal is to discourage bullying by encouraging the wearing of the colour pink, and today we all know it as Pink Shirt Day.

2012 is the fifth year for Pink Shirt Day (PinkShirtDay.ca), which will be held on Wednesday, February 29. This is London Drugs’ fourth year of participation, and all locations will be selling pink shirts and buttons to raise awareness and funds for anti-bullying programs supported by the Boys and Girls Clubs of South Coast B.C. as well as the CKNW Orphan’s Fund.

Last year, net proceeds of shirt sales at London Drugs totalled $75,000. This year we want to contribute even more, and hope to spread the word even farther that “Bullying stops here.”

Some facts about bullying:

So dig out your pink shirts, pants or socks and have them ready for February 29th. Or visit a London Drugs store for the official Pink Shirt Day t-shirts or buttons. We’ll be rallying on our Facebook Page (www.facebook.com/LondonDrugs) and on Twitter (www.twitter.com/LondonDrugs) so follow us there for more information.
Posted by London Drugs at February 20, 2012 11:57 pm

Comments: Comments Off on Get in the Pink—Pink Shirt Day Feb. 29!

Pink Shirts at London Drugs raises over $100,000 for the Boys and Girls Clubs 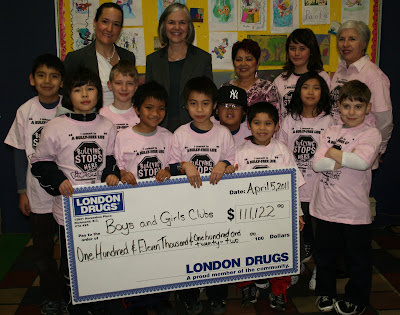 On Wednesday, April 6 London Drugs presented a cheque for $111,122 to the Boys and Girls Clubs following the success of the 2011 Pink Shirt Day campaign. The total for the 2011 campaign is the largest generated from the sale of the pink shirts at London Drugs stores across Western Canada with 100 per cent of the proceeds going to the Boys and Girls Clubs.

END_OF_DOCUMENT_TOKEN_TO_BE_REPLACED

Comments: Comments Off on Pink Shirts at London Drugs raises over $100,000 for the Boys and Girls Clubs

For the fourth consecutive year, London Drugs is building awareness and offering the Anti-bullying Pink Shirt Day shirts at all 74 London Drugs locations. 100% of the $9.80 T-shirt proceeds go to local Boys and Girls Clubs in communities across Western Canada.

Last year, more than $50,000 was raised for the Boys and Girls Clubs as a result of Pink Shirt Day through London Drugs stores. “London Drugs is proud to support anti-bullying and the Boys and Girls Clubs with the sale of the pink anti-bullying T-shirts,” said Wynne Powell, London Drugs president and CEO. “We encourage everyone to take a stand against bullying and wear your pink shirts on national Pink Shirt Day, Wednesday, February 23rd.”

Boys and Girls Clubs programs foster self esteem, social engagement, academic success, inclusion, acceptance, respect for self and others, and connection to community—all of which are key elements of bullying prevention. BGC’s rely heavily on community support to deliver their daily Club programs.

“We are proud to be supporting the fourth annual Pink Shirt Day because we know that by raising awareness and educating people about bullying, we have the potential to put an end to it! Boys and Girls Clubs are honoured to be the social partner of this campaign and we are grateful for the way London Drugs has chosen to be involved. By selling pink shirts throughout their chain, they are not only helping to create awareness, but they are also helping to raise money that will stay in each community to help with anti-bullying programs! Last year, $15,000 of the $50,000 raised was shared with Alberta, Saskatchewan and Manitoba communities and we hope to be able to increase that this year.” said Carolyn Tuckwell, President and CEO of Boys and Girls Clubs of Greater Vancouver.

T-shirts are available in both adult and youth sizes ranging from small to XXL. For further information, visit www.pinkshirtday.ca.