Looking for gifts with a Canadian flavor this Christmas? Whether Canadian Designed, Canadian Owned or Canadian Proud, these brands and products let you shop with a genuine Canuck connection. So tighten your toque, grab some loonies and check them out. And remember, London Drugs is 100% Canadian Owned since 1945, with our head office right here in Richmond, BC.

Created in 1967 in Montreal, Annabelle Cosmetics develops colourful and cosmopolitan beauty essentials that support a kaleidoscope of cultural diversity, and a vibrant, visionary celebration of humanity.

Province Apothecary is blending the wilds of Canada into nourishing and balancing skincare. All products are made with the highest quality certified organic ingredients and local ingredients that have been sourced from each Canadian Province.

Founded in 1895 in St. Thomas, Ontario by brothers Edward and Albert Kerr after emigrating from Scotland. Today, Kerr’s products are still manufactured at their head office in Toronto in a factory that’s peanut free, tree-nut free and gluten free. Sweet.

Started on a pedal-powered excursion by a group of women to an island off the coast of British Columbia, Canada. These fairly traded, organic chocolate bars are good for the planet, good for the growers and tasty for you!

Made in Canada by Ganong, Canada’s oldest chocolate and candy company, established in 1873, in St. Stephen New Brunswick.

This 100% Canadian organic maple syrup is made in Canada and brought to you by a 100% Canadian company – London Drugs. Choose from Canada Grade A Amber or Dark.

Non-GMO sparkling beverages flavoured with natural fruit extracts, from a Vancouver, BC Company.

Founded in Quebec in 1972. Lise Watier was one of the first women to establish herself in the Canadian cosmetics industry and built a major brand. Lise Watier is now part of the Canadian owned Groupe Marcelle.

Choose from camera bags, cases and carry-alls designed by an iconic Canadian company with its early beginnings in a small cabin in Canada’s Algonquin Park.

Don’t forget our four footed Canadian friends at Christmas time. This 100% Canadian owned company makes 100% of their dry pet food in Canada with an average of 80% Canadian sourced ingredients.

A wide range of quality Canadian designed kitchenware, brought to you by Atlantic Promotions, a Quebec owned and operated company for over 50 years.

A Canadian company offering kitchen utensils and accessories to Canada and the world, based in Boucherville, Quebec.

Made by a Canadian company, designed in Montreal.

Hand-poured, 100% soy candles made in

Innovative cameras designed, marketed and sold exclusively in Canada. Part of Gentec, a trusted Canadian company for over 30 years.

Browse our CDs, DVDs and Vinyl Records for Canadian Classics like The Tragically Hip. Neil Young, Rush, Diana Krall and of course, CBC’s The Vinyl Cafe.

Sprague Foods. Made in Canada since 1925. 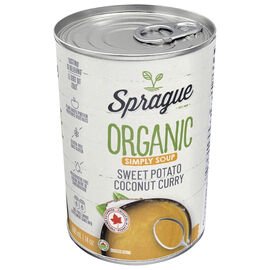 In 1925, J. Grant Sprague built his first cannery in the village of Mountain View, Ontario, naming it J.G. Sprague & Sons Canning Co. They have been canning in the Prince Edward County region ever since. During the 1920’s and 30’s, canned goods from the Mountain View plant were shipped via boat from Belleville and Picton to Montreal, Toronto, and even Western Canada. In 2009, Rick Sprague, Grant’s great-grandson, became Sprague Foods’ fourth generation president. Rick has steered the business toward a focus on healthy foods with natural ingredients. 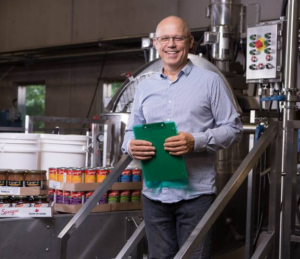 All Sprague products are pressure-cooked for preservation in 100% BPA-free packaging, and their organic certified products contain no preservatives.

“Having been around for so long as a canner, we know from experience that Canadian farmers grow the best organic crops on the planet,” says Rick Sprague, “This is why we only use 100% Canadian-grown organic beans and lentils in our delicious pantry-friendly organic soups. Grown in Canada, canned in Canada, for Canadians. And future Canadians, too!” 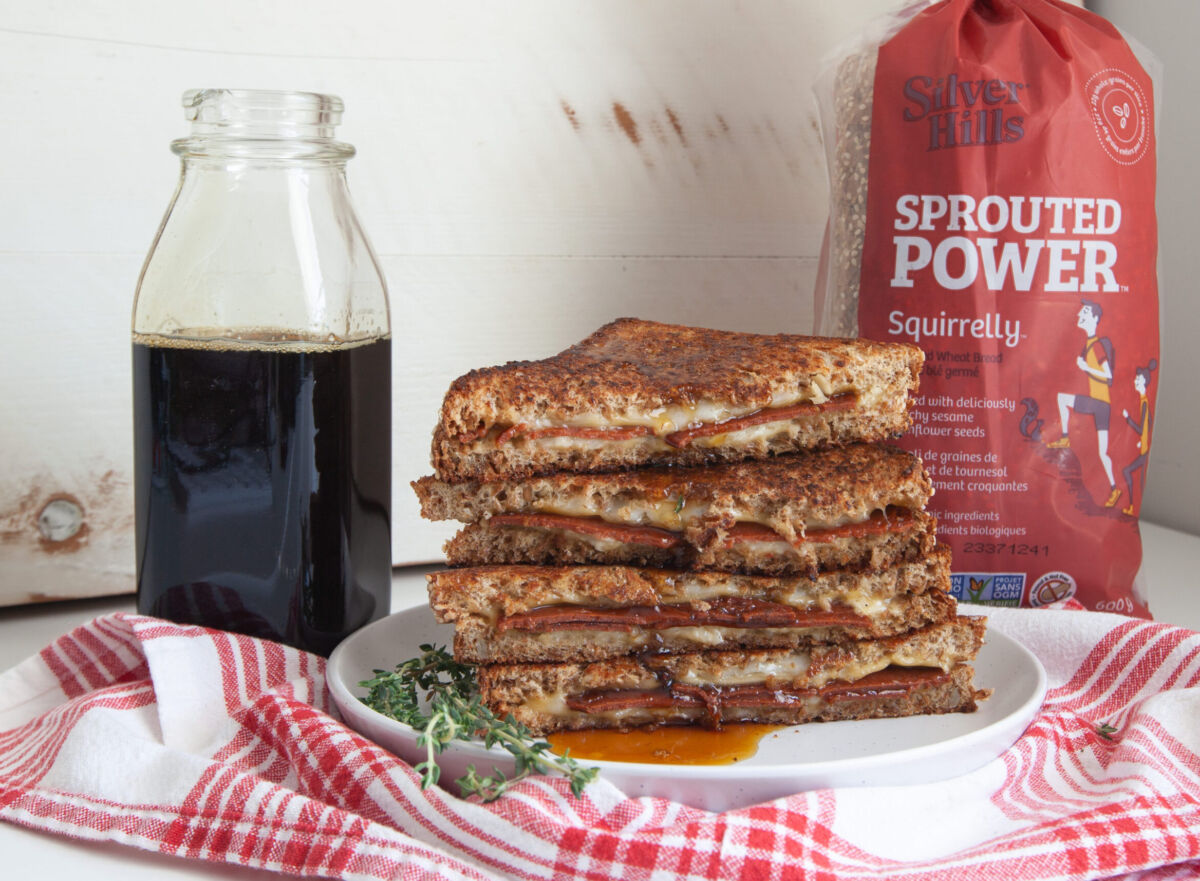 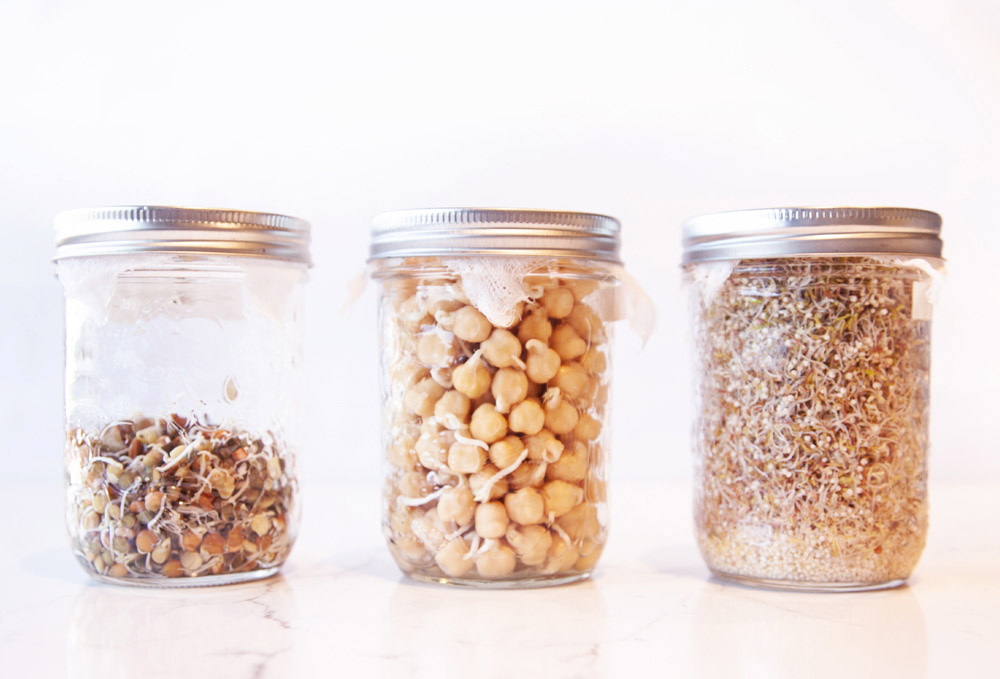 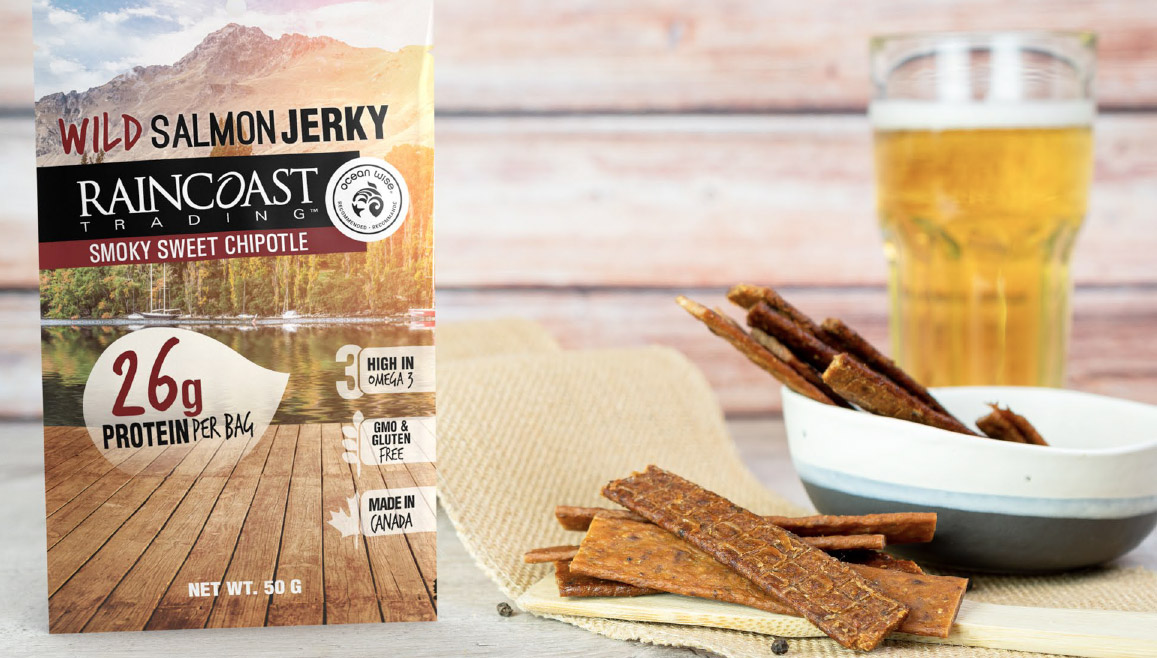 First Nations owned Raincoast takes Canadian snacking to a whole new level. On the pristine coast of Vancouver Island, the ocean has been a giver of life for generations. Here, Raincoast Trading (part of the Nuu-Chah-Nulth Seafood enterprise) creates its famed Salmon Jerky, made from 100% wild caught salmon. This hook & line fishing method helps protect other ocean species and ensures 100% traceability from the boat to the package. The ingredient list is refreshingly pure too, including minced wild chum and/or pink salmon, organic sugar, sea salt, canola oil , spices and natural hardwood smoke. That’s it! 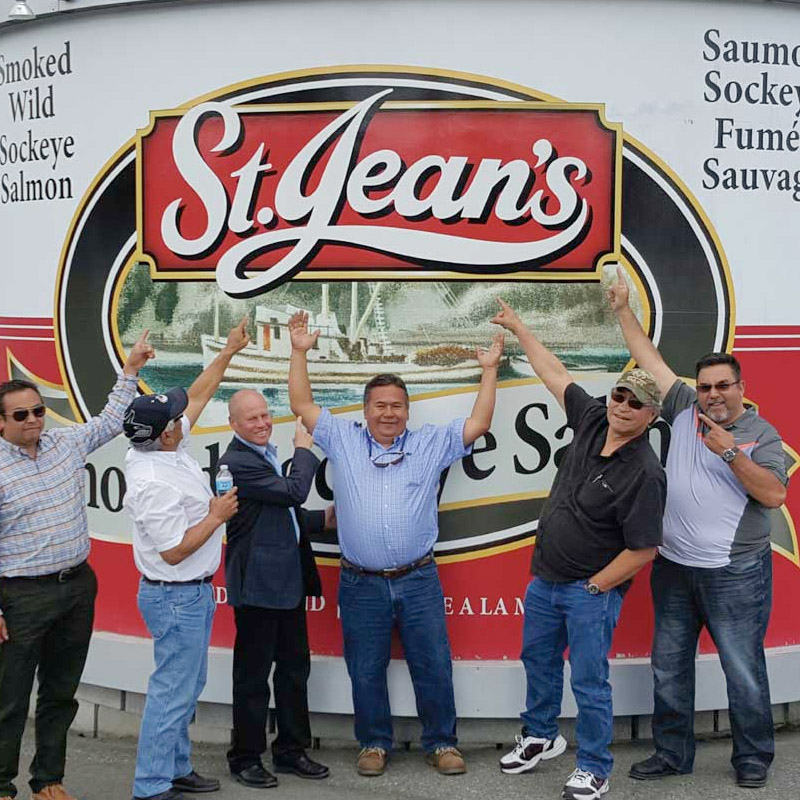 The company that makes these delicious products has been a family-run Canadian west coast institution for over 50 years. After gaining international attention for their products at Expo 86 in Vancouver, St. Jean’s Cannery & Smokehouse expanded with a number of depots in the Lower Mainland and the Vancouver Island communities of Campbell River and Port Alberni. They also acquired Raincoast Trading, highly respected for their sustainable fishing practices and connections with retail markets in the USA and Canada. 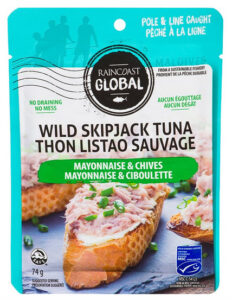 In 2015, ownership of these enterprises was transferred to the Nuu-chah-nulth – five Indigenous nations. With a long and proud history as stewards and participants in BC’s seafood economy, the Nuu-Chah-nulth are committed to ensuring these gifts that the ocean gives us will be cherished and passed along in good health to our grandchildren’s grandchildren. Now Raincoast also offers their Global line of Skipjack Tuna products, using fish caught in the Maldives, with the same dedication to sustainability and quality. So the next time you reach for a snack, have a taste of Canadian history, and toast to our shared future. 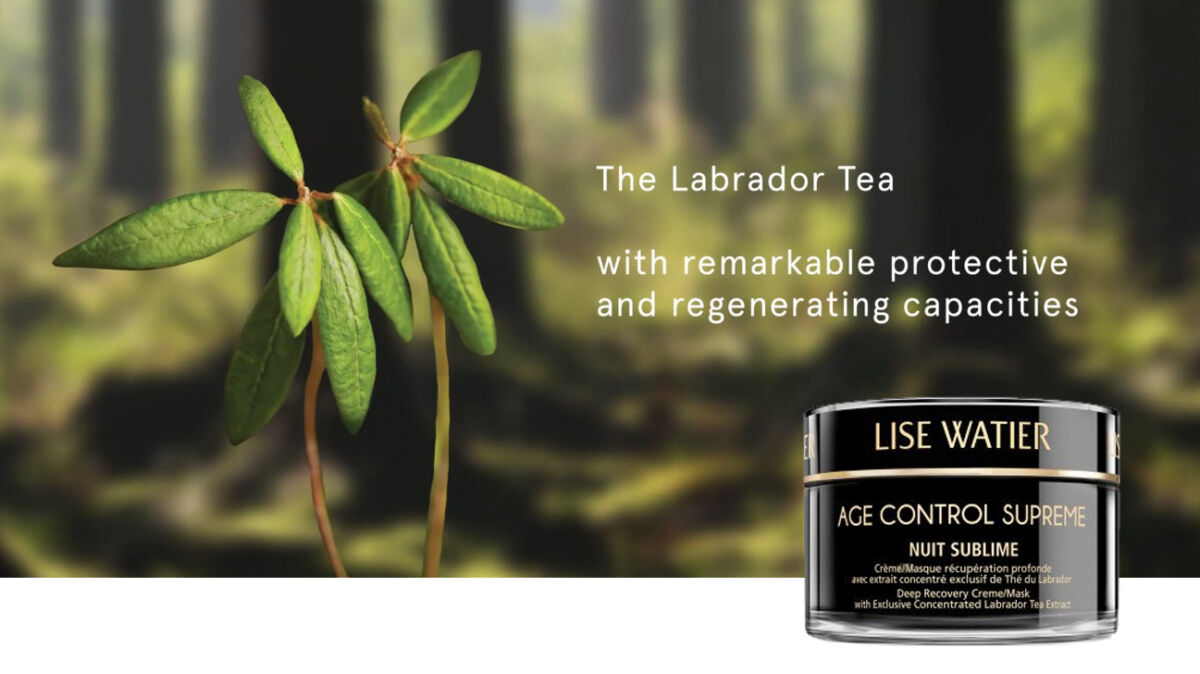 The deep forests of Quebec may not be the first things that come to mind when you visualize high-end beauty products. But that’s exactly where the scientists of Lise Watier got their newest inspiration. Labrador Tea has naturally evolved incredible protective and regenerative mechanisms in order to survive in Québec’s rigorous climate. Harnessing the properties of this hardy plant for cosmetics is an exclusive innovation developed by Lise Watier Cosmetics in collaboration with researchers at l’Université du Québec à Chicoutimi.

Lise Watier was born in Montreal in 1942, created a self-improvement and makeup course company in 1965 and launched her own line of cosmetics in 1972. Besides building an iconic Canadian cosmetics brand, her entrepreneurial spirit has also extended to philanthropy. 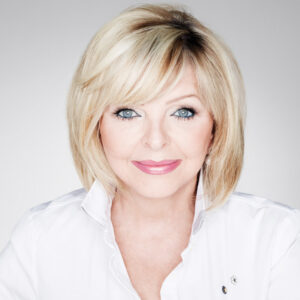 In 2009, Madame Watier founded the Lise Watier Foundation, a non-profit organization committed to empowering women and girls in need with the chance at a better life, donating 100% of proceeds generated from sales of Rouge Plumpissimo – Rose Tendresse lipstick and Sparkle of Hope lip gloss. Since 2010, these two products have raised over $1,000,000 in funds.

Together with Groupe Marcelle’s other renowned brands, Lise Watier Cosmetics employs almost 350 people and distributes some 450 products to over 1,500 points of sale across Canada, as well as online across North America. So if you are looking for the finest Canadian makeup, fragrance and skin care products, you could go to the forests of Quebec – or you could just come down to your local London Drugs. 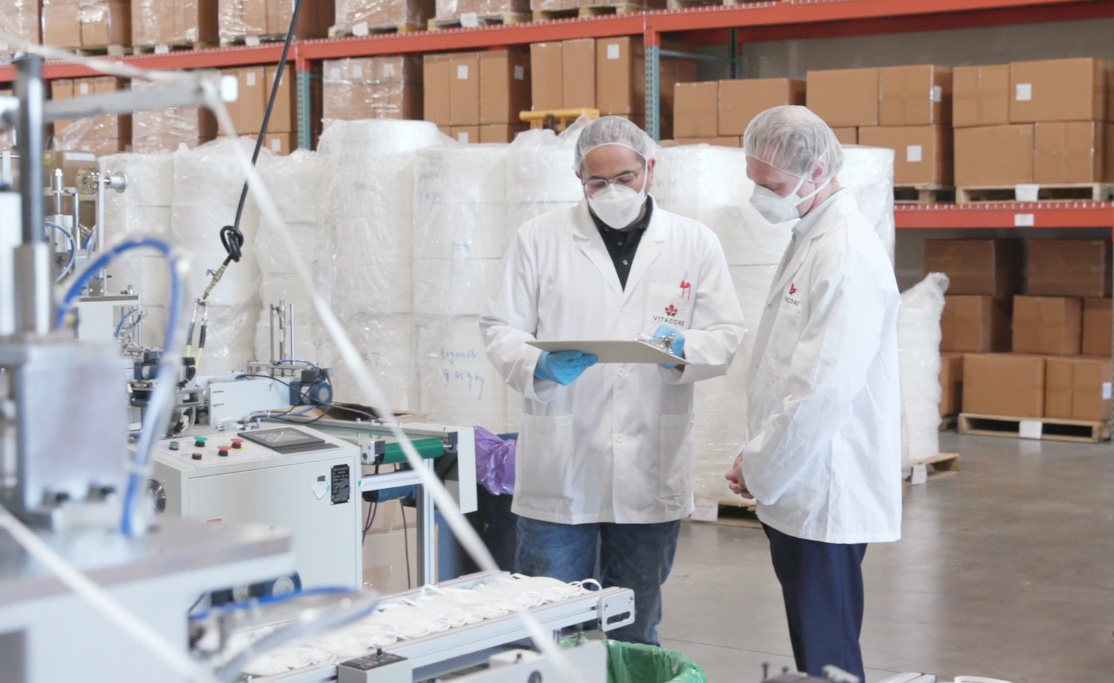 Vitacore steps to the Canadian Front Line with CAN-95 Masks

Before the Covid-19 pandemic hit, the idea of Personal Protective Equipment (PPE) was far from the minds of most Canadians. Now, a mask is one of the things we can’t forget every time we leave the house.

“When COVID-19 hit, we saw the need to ensure that our communities, particularly frontline workers, have a consistent high-quality supply of PPE,” said Mikhail Moore, president of Vitacore, “Our mission and commitment is to homegrown innovation that protects Canadians, allows our country to be self-sustaining, and creates local jobs.”

Vitacore is a collaborative corporation of Canadian doctors, scientists, engineers, and business leaders. Even the development of the CAN-95 mask was Canadian. Researchers at McMaster University’s  Centre of Excellence in Protective Equipment Materials provided expertise to help develop fabric and determine the best machines for production. Testing was completed by the National Research Council of Canada.

As Canadians get ready to return to a safe and healthy everyday life. Vitacore helps make sure we are protected and prepared for whatever comes next.

That’s a can-do attitude all Canadians can wear proudly. 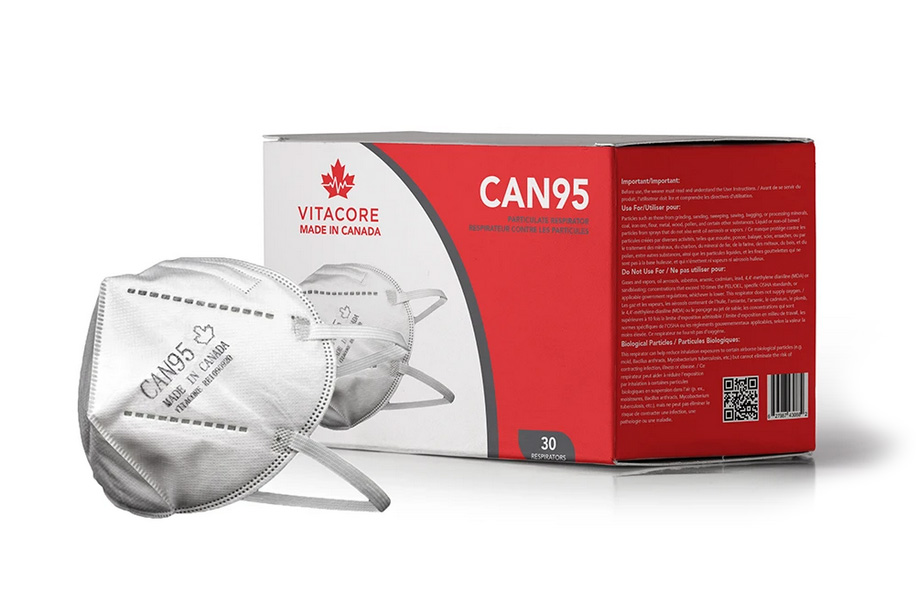 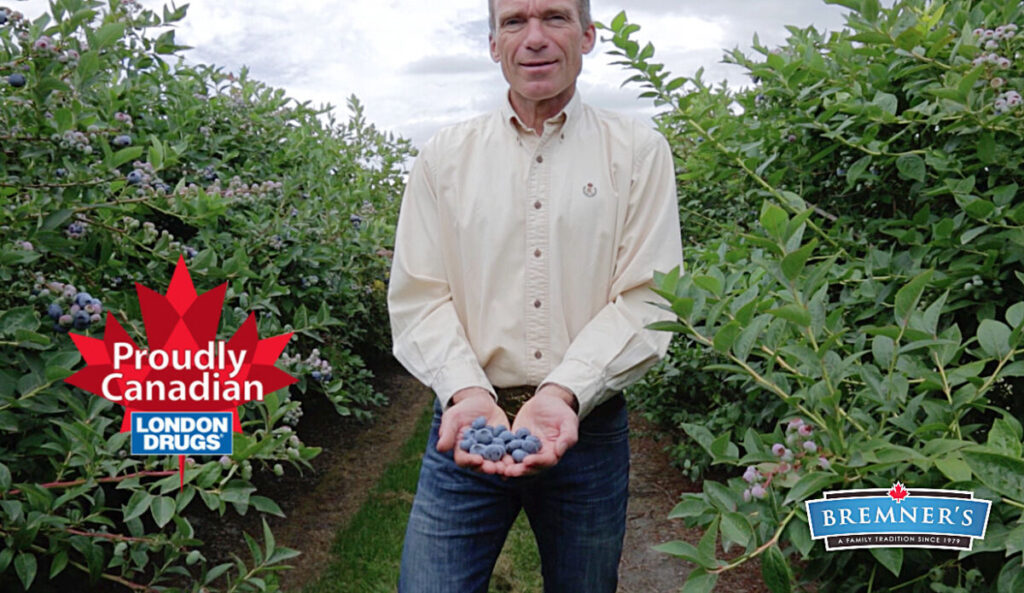 Terry Bremner, Founder of Bremner Foods, describes their company in typically understated Canadian style. “We’re just a company on the farm, trying to make the best product in the world,” he says. From their roots in the rich soils of Delta, BC, Bremner Foods is literally growing Canadian success from the ground up.

It all started with local land, and local berries. 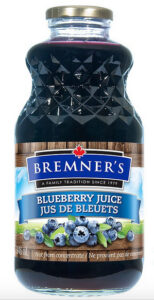 Bremner’s is family owned, by 3rd generation blueberry and cranberry farmers. “My parents came to Delta in the 1950’s, and we’ve been doing various farming in the Delta area since then,” Bremner says. Two mainstays of their line are pure blueberry and cranberry juice. Both of these berries are native to North America and grow particularly well in BC. “On two sides of our property is Burns Bog,” Bremner continues, “It gives the berries a more intense flavour, being close to their native soil.” 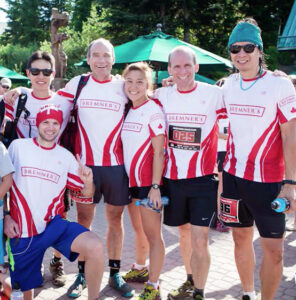 “Our goal is to make premium products that are healthy and nutritious,” says Bremner, “All the hard work and dedication is worth it when customers tell us that our juice is the best, or how our juice is helping with medical issues.” Berries are well known for their antioxidant content, especially blueberries. One jar of Bremner’s contains the pure juice of two-and-a-half pounds of blueberries, providing a natural Canadian health boost. Bremner puts it simply: “Your fuel that goes in you is your energy that comes out.” The Bremner team proves the point, participating in 50-kilometer races and other events, fueled by Bremner’s Juices.

“Canada is known for the best country, clean air and water, and quality products.” Bremner says. And these values are shared with their London Drugs partnership. “We have been in London Drugs for over 10 years. We really appreciate London Drugs being a Canadian company, and the Louie family’s long Canadian history.”
We’ll toast to that – with a tall cool glass of Bremner’s juice.