Reminder to Healthy Individuals: Getting Your Flu Shot
Protects the Vulnerable and Saves Lives

For every flu shot administered at London Drugs this year, a lifesaving vaccine will be donated to help protect the world’s most vulnerable children from vaccine-preventable diseases. 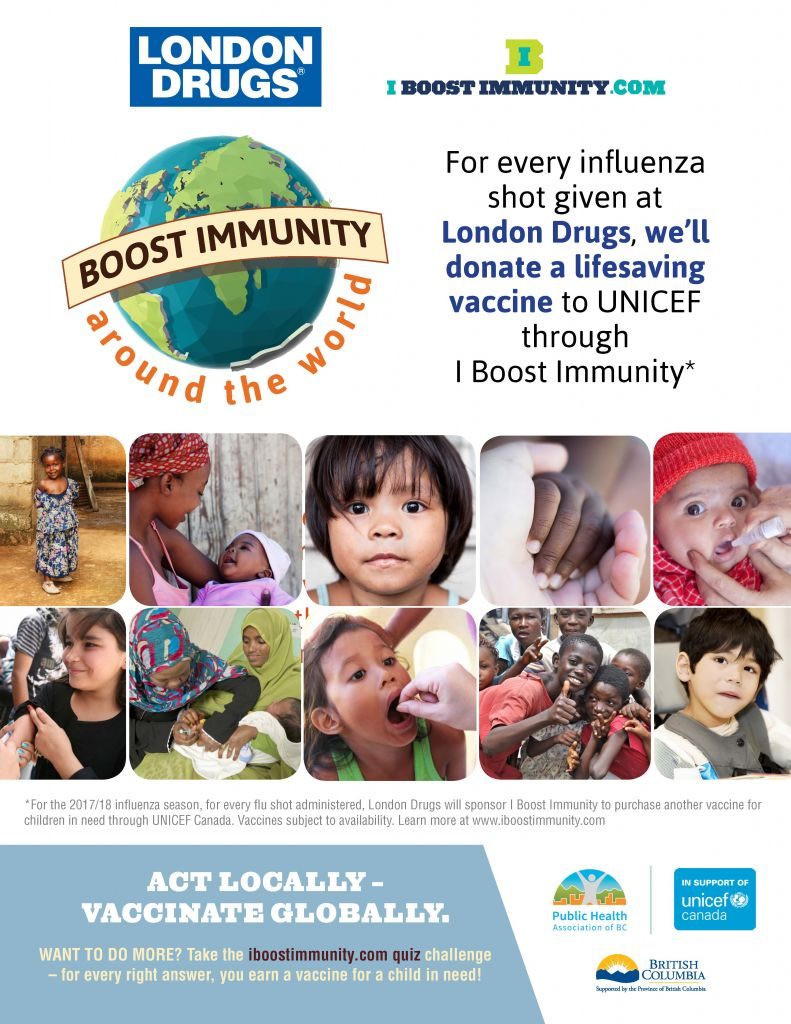 END_OF_DOCUMENT_TOKEN_TO_BE_REPLACED

Comments: Comments Off on Flu Shots at London Drugs

Preventable warns of the dangers of mixing medications during this flu season.

With the cooler weather and flu season upon us, the Community against Preventable Injuries (Preventable) is partnering up with London Drugs to raise awareness about the dangers of mixing medications and self-medicating.

Tragically, unintentional poisoning is among the top three causes of death and hospitalization in BC. In BC alone, hospital emergency departments treat an estimated 210,000 patients each year for adverse drug events.1 Drugs or medicinal agents are the predominant substances that result in poisoning deaths and hospitalizations, accounting for approximately 84 per cent. According to the BC Drug and Poison Information Centre (DPIC) data, the majority of calls were related to non-prescription (22.8 per cent) and prescription medications (22.2 per cent)2.

“No one expects to have a serious drug interaction or that mixing medications could lead to death…but it does happen,” says Dr. Ian Pike, spokesperson for Preventable. “The key to reducing preventable injuries including the unintentional mixing of medications is behaviours and attitudes. This fall, we’re pleased to partner with London Drugs again to raise awareness about the scope and magnitude of preventable injuries in this province, and to encourage people to have a word with themselves, and their pharmacists before self-medicating and mixing medications.”

As part of this Preventable campaign, signs will be placed in London Drugs stores across BC with the message “You’re not expecting mixing medications to make you feel worse.” In addition, Preventable will be airing 15-second television spots featuring London Drugs’ Vice President of Pharmacy, John Tse, with the same message. The television spots and signage will also be supported by a social media campaign to further help raise awareness about this important issue, and to encourage British Columbians to talk to their health care provider.

Preventable and London Drugs hope to make a difference by raising awareness and getting British Columbians to think differently about their current attitudes and behaviours toward preventable injuries.

London Drugs has provided a list of suggestions to help prevent people from mixing medications:

Comments: Comments Off on Preventable warns of the dangers of mixing medications during this flu season.