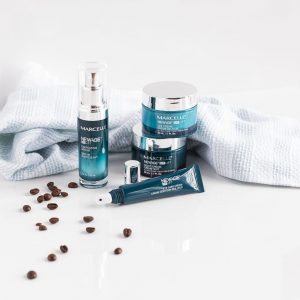 2.  No purchase necessary. Limit one (1) entry per social network per contest. Limit one (1) prize may be won per household.  Entries must be received no later than 11:59 pm Pacific Time on August 10, 2018.  London Drugs is not responsible for entries that become lost or misdirected.

3.  Contest is open to all residents of British Columbia, Alberta, Saskatchewan, and Manitoba who, as of the date the prize draw is made: (i) have not won a London Drugs contest since August 7, 2017; (ii) have reached the age of majority in the province in which they reside as at August 10, 2018 (iii) are not employees of London Drugs, their respective advertising and promotional agencies, the independent judging organization (if any), or any family member living with any such employee.

5.  There will be 10 (ten) prizes awarded to ten winners: each receiving ONE Marcelle Newage Uplift Plumping & Perfection Care Kit. Each prize has an estimated retail value of $150. Prize(s) must be accepted as awarded, are non-transferable and no substitutions are permitted. London Drugs reserves the right to substitute a prize of equal or greater value should any prize become unavailable for any reason. Prize will be awarded at the closest London Drugs location to the winner.

Easy Back to School Makeup Tutorial

If you’re heading back to school this fall, our Beauty Advisor Chelsey has an easy, natural-looking beauty routine for you! From a light coverage BB cream to all-in-one brow kit, Chelsey’s look is perfect for busy mornings. Plus, she shares her back to school skincare regime, so you can wake up and start off your day with clean, healthy skin: the ideal canvas for makeup application!

Comments: Comments Off on Easy Back to School Makeup Tutorial

Happy Canada Day! We’re proud to be a Canadian company that carries great Canadian brands like Marcelle Cosmetics, and today we’re excited to be celebrating with a Marcelle Canada Day giveaway!

Here’s how to enter to win this great Canadian prize pack:

And as a special in-store bonus right now, buy any 2 Marcelle products, and get the 3rd FREE! Plus, the Marcelle Makeup Removing Cleansing Cloths are just $24.99 ($38.97 value). These offers are valid from July 1st – July 6th. Find a London Drugs store near you!

Whether you’re planning on a hot date or a night out with your best friends, Valentine’s Day is a great opportunity to have some fun with your makeup routine. This step-by-step tutorial will show you how to get doll-like lashes and a bold matte lip for a sweet yet sultry look. Our Beauty Advisor Amanda has handpicked the best products to use, with both budget-friendly and splurge-worthy options, so you can look gorgeous no matter what your budget is!

END_OF_DOCUMENT_TOKEN_TO_BE_REPLACED

The New Year is a time to look back on the past year, reminisce and maybe resolve to make positive changes. That includes ditching bad beauty habits. London Drugs Beauty Advisors have rounded up the top beauty resolutions from developing a good skincare regimen to tossing expired makeup.

It’s time to take better care of your skin. This year, invest in a quality skincare regimen that will keep your skin healthy and looking great. NeoStrata’s Glycolic Renewal and Night Repair creams will exfoliate dead skin cells for more radiant and younger looking skin. If you have dry, sensitive, or acne-prone skin, try one of Bioderma’s skincare lines which will target your specific skin concern.

The right tools can also improve your skincare routine dramatically. The Philips PureRadiance Facial Cleansing System is 10 times more effective than hand cleansing, thanks to its vibrating and rotating brush.

END_OF_DOCUMENT_TOKEN_TO_BE_REPLACED

Comments: Comments Off on 7 Resolutions for Beauty Buffs

Our Beauty Editor Britta caught up with vendors at the London Drugs Cosmetics Conference in Whistler, to get an insider look at what new beauty products and trends you can expect to see soon at your local London Drugs.

In this video, we take a peek at some of our favourite budget-friendly makeup and skincare brands to see what products they’re excited to bring us this season, including new goodies from NYX Cosmetics, Marcelle, and Revlon.

Subscribe to London Drugs on Youtube, and stay tuned for more videos from the London Drugs Cosmetics Conference!