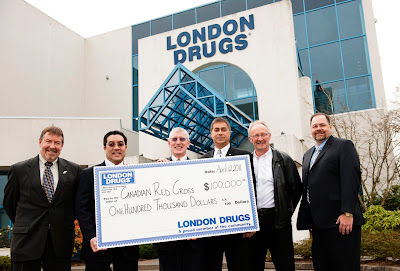 Japan is trying to rebuild after a magnitude 9.0 earthquake on March 11 triggered a tsunami that killed thousands and left countless others homeless.

As of March 13th, London Drugs began accepting donations on behalf of the Canadian Red Cross to help aid the relief efforts in Japan.

As soon as our customers became aware that London Drugs was accepting donations, they immediately responded. In just over 33 hours of our stores collecting, we had over 2500 donations and more than $26,000 raised.

In the first 47 hours that stores began collecting donations, more than $700 per hour was being donated.
Funds raised will be used to support the Red Cross response efforts in Japan. This may include relief items (blankets, sleeping mats, and hygiene items), medical supplies and equipment and deploying emergency personnel.

On March 19th, the Canadian Red Cross announced a transfer of $5 million in cash to the Japanese Red Cross to support relief efforts. The money will be used to support emergency health and the distribution of relief items to people impacted by this disaster.

Comments: Comments Off on London Drugs presents $100,000 donation to the Canadian Red Cross

Previous Post: Pink Shirts at London Drugs raises over $100,000 for the Boys and Girls Clubs