Summer is here! June is going to be slightly quieter for new game releases but quality is always better than quantity, am I right? This month we’ll see five new games and two re-releases for next generation consoles! Let’s take a closer look.

Faith is back! Mirror’s Edge: Catalyst is a reboot of 2008’s Mirror’s Edge. You play as Faith, a courier who gets around the city by way of parkour, delivering messages to help take down the city’s totalitarian rulers. She didn’t use them much last time but this time Faith will be unable to use guns at all, instead you’ll have to focus on parkour maneuvers and takedowns. Don’t worry though, when you’re running you gain focus, and if you achieve enough focus you will be able to see and dodge bullets!

Mirror’s Edge: Catalyst will be released on June 7th and is available for pre-order for Windows, PlayStation 4, or XBOX One on LondonDrugs.com 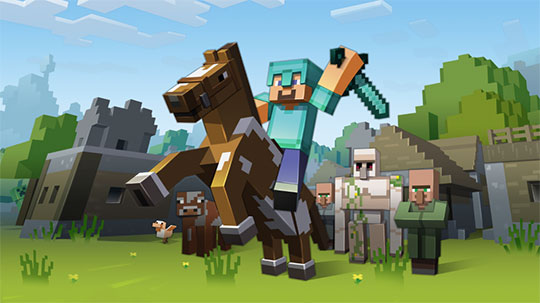 Still haven’t jumped into the Minecraft sandbox? Now’s your best chance yet! Minecraft: Favourites Pack features the game itself plus seven texture packs! Build a thriving city, your favourite fantasy realm, or the world of Master Chief!

Do you love MegaMan? Then pay close attention friends, because Mighty No. 9 is finally here. Keiji Inafune’s spiritual successor to MegaMan has you playing as Beck, the 9th in a series of fighting robots called the Mighty Numbers. When a computer virus wreaks havoc on the rest of the Mighty Numbers you must take them all on to discover who is behind the scheme and how to stop it!

Mighty No. 9 has been delayed several times now, including twice this year but is now scheduled to (hopefully) arrive on PlayStation 4 and XBOX One on June 21st. Keep your fingers crossed! Pre-order it now on LondonDrugs.com!

6000 light years from Earth, the planet Faykreed is thrown into chaos when first contact is made with an advanced, space faring civilization. This chaos, and a new menace, threaten the mission of the Pan-Galactic Empire to bring peace to the entire galaxy. This action JRPG is the fifth in the main Star Ocean series and 9th in the franchise. Star Ocean: Integrity & Faithlessness is set for release on PlayStation 4 on June 28th. Order your copy now!

A long time ago in the galaxy far, far away….. Lego Star Wars! Relive the story of the smash hit The Force Awakens as only Lego can: hilariously and fun! Play as your favourite characters Rey, Fin, Han Solo, Kylo Ren, Phasma, BB-8, and more! And in addition to retelling the story of The Force Awakens the game also includes new stories from the time between Return of the Jedi and The Force Awakens bringing new insights to the backstories of our new heroes and villains!

Last month we called Tropico 5 the game that keeps on giving and we weren’t lying! Tropico 5 Complete Collection for PlayStation 4 is out on June 28th! (Update: release date has been delayed until August 16th for this title). This new edition will include all three DLC packs released for the PS4 so far with 10 new scenarios, new eras to start your island in and guide it through, and all new buildings to research, build, and renovate! Pre-order your copy on our website today!

It has been 200 years since Mars was colonized and the planet is now a wasteland. The War of Water rages and you, a rookie technomancer, are on the run from the secret police. Complete quests and fight to level up your skills. Three distinct fighting styles to learn and different ways to use your electrical powers to augment your combat style. Make your quests solo or add a companion to help you uncover the mysteries of Mars and the guilds that rule it.

The Technomancer will be released on June 28th for PlayStation 4 and XBOX One, and you can secure your copy at Londondrugs.com today!
That’s all the news that is news for June! Visit your local London Drugs Computer Department to get your copies of all these new games and for all your console and PC gaming needs! Our LD Experts are waiting to help.

Comments: Comments Off on Upcoming Games for June

Next Post: Three Amazing Roadtrip Destinations You Need to Visit