5 Reasons Curling is Awesome (and So Canadian!) 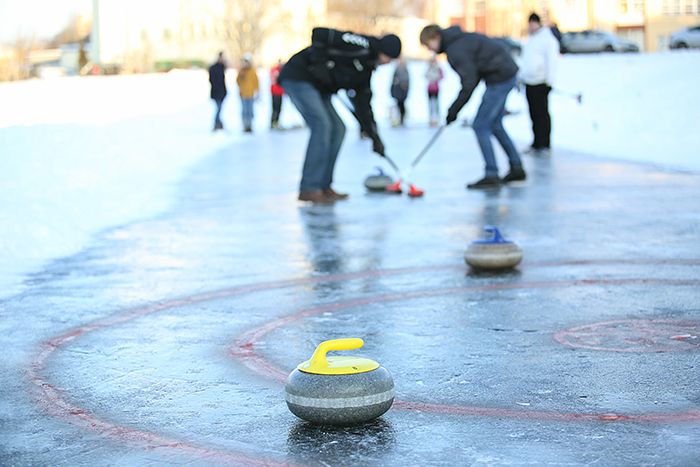 Haaaaaaaaaaaaard! If the games in PyeongChang have re-awakened your interest in curling, you aren’t alone. Curling clubs see membership increase every four years, as wider audiences are exposed to the drama and fun of this very Canadian sport.

Curling was invented in Scotland, but long, cold Canadian winters have driven generations of Canadians into curling clubs where community is built with every end played. Here are 7 reasons curling is awesome, and so, so Canadian!

Certainly at the elite level, curlers are in top shape. The fields at the Scotties Tournament of Hearts (Women’s Canadian Championship) and the Brier (Men’s Canadian Championship) train like crazy and are incredibly fit and strong athletes, but this may not always be the case down at your local club. Wonderfully, curling is a sport that players of all ages and fitness levels can succeed at. This inclusivity is a Canadian ideal, and we’re incredibly proud of it.

Canadians don’t love the stereotype that we’re all too polite (sorry!), but in curling, it’s kind of true. The way curlers talk about the game with each other, even at the highest level, in the most intense situations, is as if they’re two buddies deciding whether or not to go for Italian or Vietnamese food tonight. One curler will mildly express an opinion on the type of shot to take: “Let’s do an in-turn tap to the four foot.” The other curler’s response? “I don’t mind that.” You must understand that “I don’t mind that” is curler-speak for: “This is the best idea I have ever heard and if you do it we’re going to win the Canadian championship.” It’s utterly refreshing to watch nice people play sports with respect for each other. And it’s so Canadian.

3. Curling is Chess on Ice

The strategy involved in a curling game is fascinating. Shots that are made at the beginning of a 16-rock end often come into play in the very last shot, and the great curlers are the ones who manage the house and their rocks throughout. What makes it fun for the viewer is that we get to hear everything the teams are discussing as they weigh their options. The commentators play a huge role in translating the curling jargon for the home viewer, and as you learn the basics, you will start to see the different strategies paying off for the teams. The mental focus and planning that great skips need to bring their teams to victory is something to behold.

Along with the thoughtful strategy in a curling game, you’ll also get to see some big weight shots that get 3, 4, or more rocks scattering around the house. Check out Glenn Howard’s shot for 3 at the 2009 Brier. Or this one from Jennifer Jones, simply called “The Shot,” to win it all the 2005 Scotties Tournament of Hearts. Or here is a compilation of 10 great shots from the Canadian Curling Trials in 2010. Totally crazy shot-making from the best in the world, who just happen to be Canadian.

Life in Canada can be tough in the winter months. It’s no wonder that people in towns across the country take to their community curling clubs for some shelter from the elements and good times with friends and neighbours. Camaraderie is baked into the sport, with players wishing each other good luck or “good curling” before the game and usually sharing a table up in the clubhouse after the game as well. These clubhouses also capture the spirit and history of the curlers and community members that have come before, through memorabilia, photographs, and stories. Drop into a curling club for a glimpse at the people who have made their Canadian community what it is today.

Comments: Comments Off on 5 Reasons Curling is Awesome (and So Canadian!)