Star Wars TIE Fighter Barbecue – You have to see this! 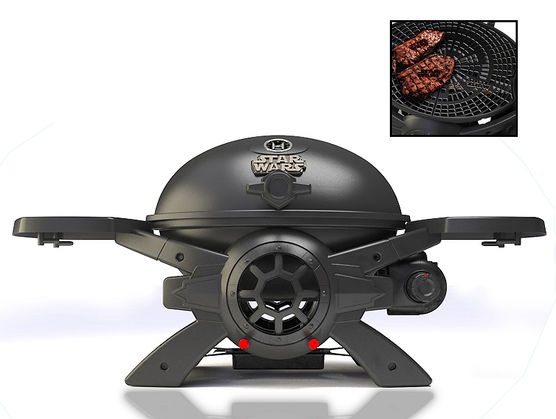 That’s no moon, that’s the Star Wars TIE Fighter Premium 10,000 BTU Portable Propane BBQ! If you just can’t help but embrace your love of Star Wars, this barbecue was designed for you, and I had the pleasure of reviewing it so you can get a better sense of just what it’s like. From the unboxing, to assembly, to putting it through its paces and finally enjoying dinner, it was an experience that had me feeling far more excited than usual for cooking, and rewarded the inner nerd with plenty of Star Wars Easter eggs. It’s also approved by the CSA (Canadian Standards Association), so you can rest assured that you’re getting a quality cooking machine. so, those might not be the droids you’re looking for, but this might be the barbecue you’re searching for instead!

The unboxing itself was quite exciting, as there are plenty of little details included with this barbecue. Lifting it from the box, you can instantly see its charming resemblance to a TIE fighter, with the X-shaped design and metalwork designed to look like the front window of the fighter. The similarities become even more apparent once you hang the side trays in their place – they form the iconic wings of the TIE fighter when flipped down, and provide a sturdy place to do meal prep and organize food once they’re flipped up. The sleek black finish gives it a classic appearance in your back yard, with subtle red accents adding an edgy touch. An imprinted Star Wars logo at the front gives an official nod to the films. The next surprise was the instruction guide, which came sealed in a mysteriously heavy envelope. Opening this envelope revealed not only a set of instruction cards with prints of your favourite Star Wars characters on the back, but a metal engraved collector’s certificate listing the stats of the barbecue. It was an extra-special touch that instilled the inner geek with a sense of nerdy glee. But the details didn’t stop there, there was more to be discovered as we assembled this BBQ.

Set up was simple – the barbecue is mostly assembled straight out of the box. All you have to do to get ready to cook is install the thermometer and front handle by simply screwing them secure with the included tools. Then just slip the dripping collection pan in below and connect the barbecue to your propane source, and you’re ready to go! As you go through this process, you’ll be sure to notice the thermometer. It’s one of the most unique aspects of this model, as it is designed to look like a gauge on an instrument panel. As the needle rises with the temperature, you almost feel as though it could suddenly jump you into hyperdrive.

The outside frame is constructed from cast aluminum for a sleek look and durable design that resists rust and corrosion. The barbecue weighs in at about 20 kilograms (44 pounds), making it a bit heavy, but it is fairly easy to grip and carry when you want to have cookouts while picnicking. It is simple to connect to a standard propane  bottle using the hose included with the barbecue. As always, be sure to check that you have connected them properly with a tight seal that doesn’t leak, and always connect it with the propane tank valve securely closed.

The cooking surface itself is made from strong cast iron and is crafted in the circular geometric shape of the Imperial Crest (come over to the Dark Side…we have steaks!). One of the best surprise highlights of the grill may well be the reverse Star Wars logo in this grill surface. Crank up the heat and lay a steak or burger on top of it, and it grills the logo (facing the right way) right into your meat! (While the Imperial March plays in your head). The 220 square inch surface gives you plenty of space, so you can cook up to eight or nine hamburgers at once, or mix things up like we did, with a steak or two, a few kebabs and some veggies. This makes it ideal for the average-sized family. With 10,000 BTUs of power at hand, it cooks remarkably quickly. Our array of steak, kebabs and tomatoes were ready in under 10 minutes. A handy knob a the side lets you control your heat with ease for nuanced cooking.

Digging into the array of meats and veggies, we were very happy with the results of our cookout. The kebabs were juicy and tender, vegetables had delicious flavour and the steak was, well, anything but Chewie. The fact that everything had cooked so quickly was also a great aspect, as it would have been very easy to keep a steady flow of burgers and hot dogs cooking if we wanted to have a larger cookout with a few friends.

After dinner was done, clean-up was very minimal. The cast iron grill is made up of two pieces, which can be simply lifted out and washed in the sink if needed, but a quick sweep with a wire brush should do for cleaning. The drippings pan below is also easy to remove and wash if needed, though we barely had any drippings either. The two side trays can be removed and washed as well, in case you spilled any food, or can simply be wiped down before setting them to their vertical position for storage.

Overall I was very impressed with this compact Star Wars barbecue. While it’s not the most high-tech barbecue on the market, this little model delivers reliable quality, delicious results  and is packed with attention to the little details. Whether your kids are die-hard Star Wars fans, or you’re indulging in your own fandom, it certainly brings a special aspect to outdoor cooking that will leave you smiling. The best part is, you won’t even have to go to a galaxy far, far away to find one – just check your local London Drugs!

Comments: Comments Off on Star Wars TIE Fighter Barbecue – You have to see this!