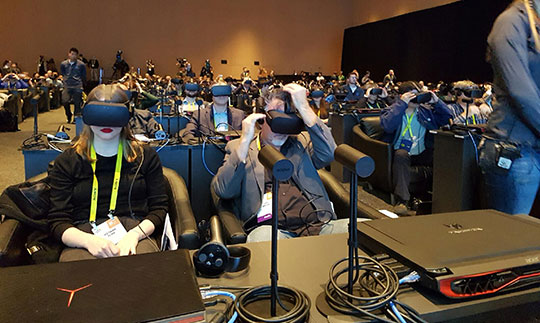 It’s day two of press conferences here at Ces2017. It’s been a heckuva day with Samsung, LG, Intel, Toyota and other presenters. The three of us can only fit so much in a day and cover so much but I think we did well.

So… amazingly beautiful huge televisions, appliances that talk to you and recognize you, and extremely good virtual reality goggles, and automated cars really fueled the day.

I think one of the partnerships that really opened my eyes today was that between Nvidia and Audi. Who would’ve thought all those years ago when Nvidia was formed in 1994 that they would be making the computers that will run the autonomous cars of the future? But video cards have to perform thousands or hundreds of thousands of functions in a very short period of time so they are experts at handling large amounts of data and responding very quickly when needed. In a way, it’s a natural combination of skill sets and manufacturing expertise.

I was privileged to be in a group of only 260 reporters that got to sit in on an Intel virtual reality demonstration that had never been done before. We went flying in squirrel flying suits, then sat on the side court at a live basketball game and watched it in virtual reality, totally feeling like we were right there, and then we were in a video game called “Arizona sunshine” in a very scary and precarious predicament.

We also had a unique demonstration that had never been attempted before on this scale.  All 260 of us could just stand or sit and watch a river flow by us, see animals and farmers in the distance and be able to look all around you like you were transported there magically. This was all real film not created artificial reality. It was like being in the middle of it in real life, not like watching a film, it was almost indescribable. The amount of data required? It takes 3 TB per frame of film to create this illusion. At 60 frames per second that means 180 TB of data per minute are required to create this illusion of being in the middle of a real film.

To top it all off we had another demonstration wearing our VR goggles that had us flying over a 250 acre solar power farm in India in real time…. it was actually happening as we were seeing it and we acted as inspectors for the solar panels. The applications for business are obvious and huge cost savings can be realized.  Very dangerous situations like search and rescue can absolutely benefit from this technology.

Tomorrow we will be taking a closer look at some of the autonomous vehicles.

Talk to you soon!

Next Post: Five Services You May Not Know Your Pharmacist Provides