Want to discover more of what your Nikon DSLR can do? 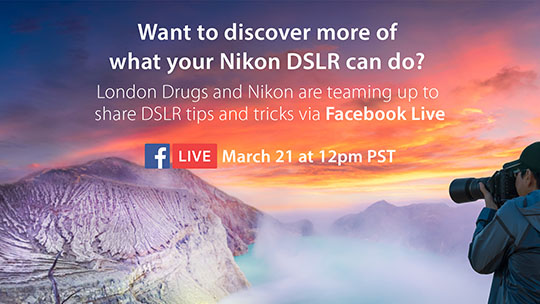 London Drugs and Nikon are teaming up to share DSLR tips and tricks via Facebook Live. Tune in to learn about using physical controls, reading the light, sharing to social media and more.

Join the conversation by subscribing to live notifications and tuning in on Wednesday, March 21 at 12pm PST.

Plus, enter for a chance to win a $100 London Drugs gift card! Every question entered before the event, and during the Facebook Live event will be entered into the draw for a $100 Gift Card. No purchase necessary.

Contest is open to all residents of British Columbia, Alberta, Saskatchewan, and Manitoba who, as of the date the prize draw is made: (i) have not won a London Drugs contest since March 21 2017; (ii) have reached the age of majority in the province in which they reside as of March 21, 2018; (iii) are not employees of London Drugs, their respective advertising and promotional agencies, the independent judging organization (if any), or any family member living with any such employee.

No purchase necessary. Limit one (1) entry per person. Entries must be received no later than 12:30 PM Pacific Time on March 21, 2018. London Drugs is not responsible for entries that become lost or misdirected.

One (1) winner will be randomly chosen on the day the contest ends (see dates below) in Vancouver, British Columbia, from all eligible entries received. To win, selected entrants must correctly answer a skill-testing mathematical question and must sign London Drugs’ declaration and release confirming compliance with the contest rules and acceptance of the prize(s) as awarded, releasing London Drugs from liability in association with the contest and prize and consenting to the use of their name, photograph, voice and statements for promotional and publicity purposes.
There will be one (1) prize of one $100 London Drugs gift card. See details and contest date below. Prize must be accepted as awarded, is non-transferable and no substitutions are permitted. Prize will be awarded at the closest London Drugs location to contest winners.

Selected winner will be contacted through Facebook messenger. No correspondence will be entered into except with selected entrants. If the winners do not respond then they will be notified for the second time, 3 (three) days after the first notification. If the winners still do not respond within 3 days of the second notification, a new winner will be chosen in the same manner until a winner is successfully contacted.

This contest is subject to all federal, provincial, and municipal laws and regulations. By entering the entrant consents to the collection of all personal information included on their entry and agrees to the use and disclosure of such information by and between London Drugs, an independent judging organization, and their agents. The winner(s) also agrees to the collection, use, and disclosure of their name, entry, photographs, voice, and statements for London Drugs’ publicity purposes without further compensation. All personal information collected from entrants will be used only for the purposes of administering the contest and for marketing and promotional purposes as contemplated by these rules; under no circumstances will any personal information be sold or rented to third parties. All personal information collected by London Drugs will be kept in accordance with the privacy policy of London Drugs, which can be viewed at www.londondrugs.com, and in accordance with all applicable privacy laws.
The right is reserved by London Drugs to terminate this contest, in whole or in part, and/or modify, amend or suspend the contest, and/or these rules in any way, should any cause beyond the reasonable control of London Drugs or its agents affect the proper administration thereof.

Comments: Comments Off on Want to discover more of what your Nikon DSLR can do?