Tobacco: What you need to know 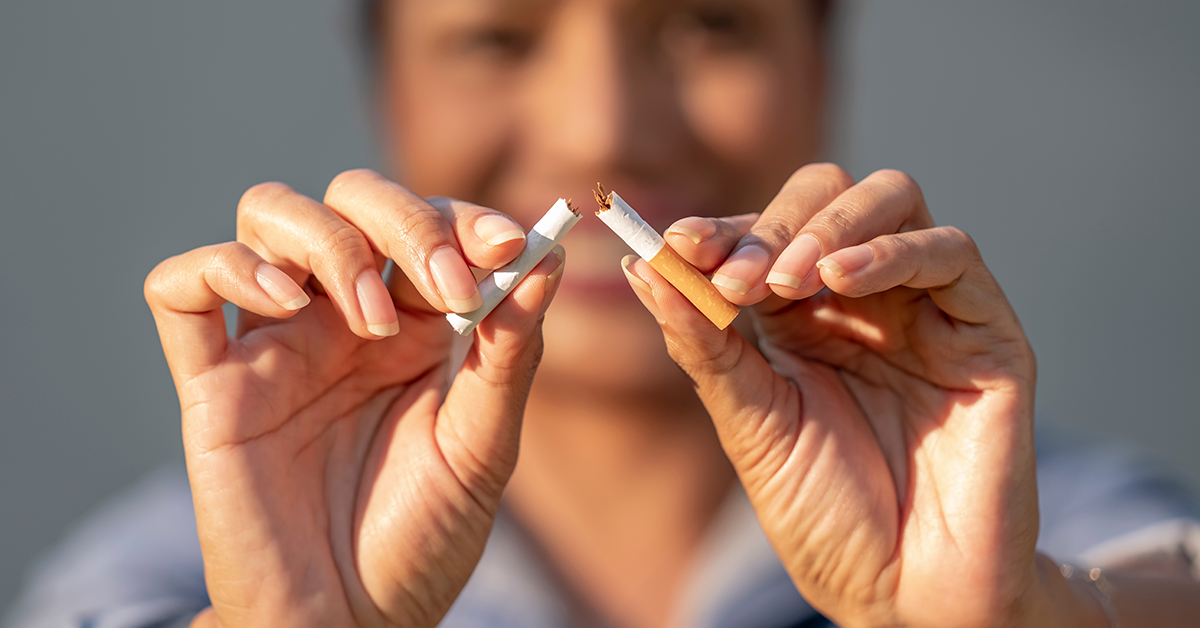 People use tobacco in a variety of ways—from traditional cigarettes, cigars, pipes, and chewing to e-cigarettes and vaping. But how much do they really know about the product they are introducing into their bodies? Tobacco contains nicotine, an addictive substance that makes it difficult to stop using tobacco. But nicotine isn’t the only troublesome ingredient. Tobacco contains over 7,000 chemicals, more than 70 of which are known to cause cancer. Smoking harms nearly every organ in the body.

How Tobacco affects the body

• When nicotine enters the blood, it triggers the adrenal glands to release epinephrine, which stimulates the central nervous system, raises blood pressure, and increases breathing and heart rate.

Smoking tobacco has been linked to:

• a variety of cancers including lung and mouth cancer

• increased risk of heart disease, which can lead to heart attack or stroke

• poor blood circulation to the hands and feet

• reduced senses of taste and smell

• irritation of the stomach and intestines

• Smoking can also affect a person’s appearance including prematurely aged, wrinkled skin and teeth that are stained yellow or brown

Many of the problems caused by tobacco smoke don’t only affect the people who smoke; the second-hand smoke can also have a significant effect on the health of the people around the smoker. For example, children exposed to second-hand smoke during their first year of life are more likely to have health problems, including sudden unexpected death.

Electronic cigarettes—also known as e-cigarettes, e-cigs, and vapes among other names—are battery-powered devices that heat and aerosolize liquids so they can be inhaled in an attempt to recreate the feeling of smoking. The liquids vary in content. Some contain nicotine, THC (the main mind-altering ingredient in marijuana), or flavourings; others contain unknown chemicals or other substances. Some research indicates that vaping nicotine may be somewhat less harmful than smoking traditional cigarettes, but that doesn’t mean it is safe; recent reports have linked e-cigarettes and vaping with lung injury and death. And people who smoke or vape may have a higher risk of complications from COVID-19 due to the lung damage they cause.

When it’s time to quit

According to Health Canada, there are five stages to quitting:

Not being ready. During this stage, the person isn’t even thinking about quitting. If challenged about smoking, the person will probably defend the behaviour.

When the person begins to consider quitting but isn’t quite ready to do it. During this stage, a person is more willing to receive information about smoking and thinks about what barriers might stand in the way of quitting.

Preparation. At this point, the smoker has made the decision to quit and may even begin smoking less. This is the time to create a quit plan and begin preparations.

The action stage. This is when people commit to quitting and take action. They may turn to family and friends to provide encouragement. This stage usually lasts up to six months, and it is when the former smoker needs the most help and support.

Maintenance. This is the stage where former smokers have learned to anticipate and deal with the temptation to begin smoking again. They have learned strategies to cope with the urge to smoke and they develop a sense of control and the ability to remain smoke-free.

The first step in developing a successful quit plan is to select a quit date. It should be close enough so that you won’t lose your motivation to quit but far enough in advance to give you time to prepare. There are some things you should do as you wait for your quit date to arrive.

• Write down a clear statement about why you want to stop smoking—for example: “I want to quit smoking to set a good example for my children.” Post it someplace where you will see it to act as a reminder.

• You will have to decide if you want to quit abruptly or to gradually reduce your tobacco use up to your quite date and then stop.

• Another decision you will have to make is whether you want to use a smoking cessation aid such as a nicotine replacement therapy (NRT) product or a prescription medication. While some people try to quit “cold turkey,” only about 6% of these quit attempts are successful. If you decide that an NRT product is right for you, your London Drugs pharmacists can help you select one that will work best for you.

• Dispose of all your tobacco products and ashtrays.

• Stock up on oral substitutes such as sugarless gum, hard candies, and raw carrots.

• Set up a support system. Tell your friends, family, and coworkers that you will be quitting, and ask them to encourage you to succeed. Ask the smokers among them not to smoke around you.

• Think about the places and activities that trigger you to want to smoke, and try to make alternate plans. For example, if you always smoke after lunch, try making a phone call or scheduling a quick errand for that time. If going out for a drink with friends triggers your smoking, suggest going to a movie instead.

Quitting may not be easy, but it will be worth it. It is likely that quitting will help you live a longer, healthier life.

• 20 minutes after quitting, your blood pressure starts to lower

• 8 hours after quitting, the level of carbon monoxide (a dangerous chemical) in your blood drops to a normal level

• 24 hours after quitting, your risk of having a heart attack begins to decline

• 2 weeks to 3 months after quitting, the airways in your lungs relax and breathing becomes easier

• 1 to 9 months after quitting, your lungs are stronger and you cough less

• 1 year after quitting, your risk of coronary heart disease drops to half of that of a smoker

• 5 years after quitting, your risk of having a stroke drops to that of a non-smoker

• 10 years after quitting, your risk of dying from lung cancer is much lower, and your risk of getting cancer
of the mouth, throat, esophagus, bladder, kidney, or pancreas decreases

• 15 years after quitting, your risk of coronary heart disease is as low as that of a non-smoker

Is it time for you to think about becoming a non-smoker for your health and the health of your family and friends? Speak with your London Drugs pharmacists for more information on smoking cessation. They will be happy to provide tips to help you achieve your goal of becoming smoke-free.

Comments: Comments Off on Tobacco: What you need to know

4 Organization Tips for the New Year

With the new year comes New Year’s resolutions. If one of your resolutions was to be more organized, we are here with some tips so you can focus on the important things this year. Continue reading for our 4 quick steps to organizing your space. 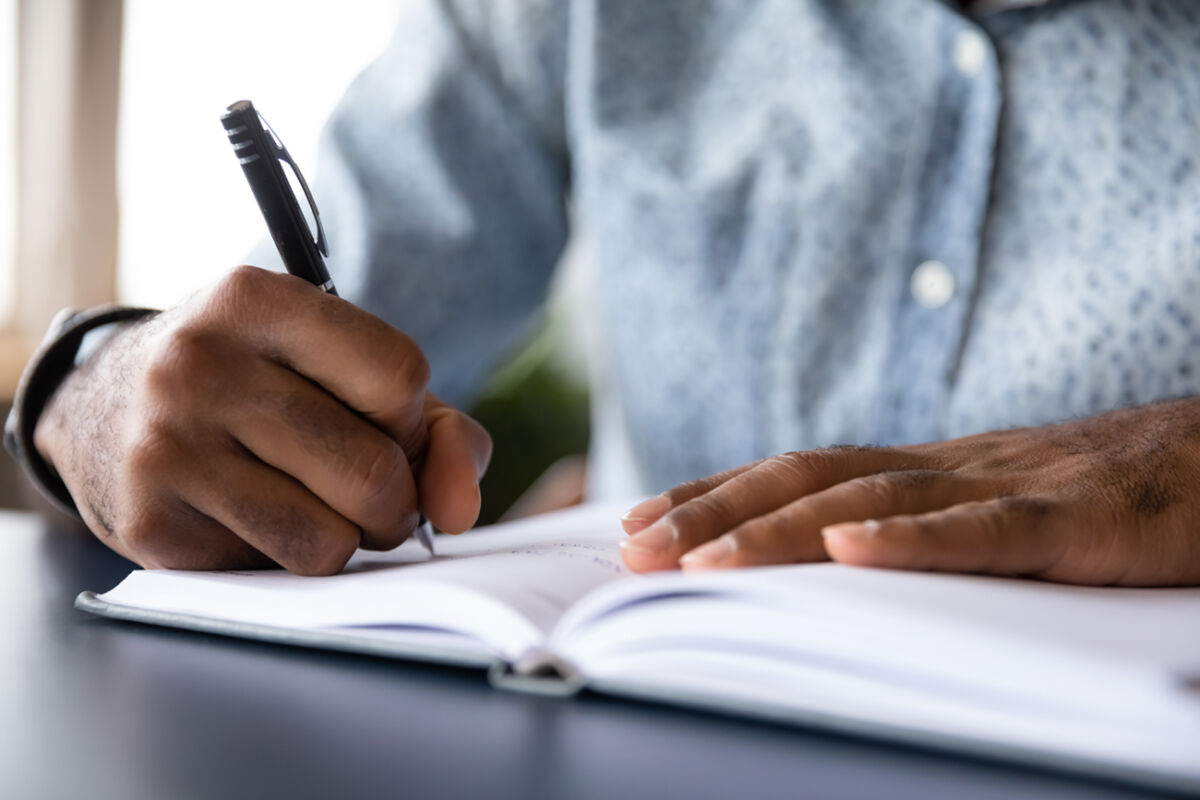 The starting point is always a plan. Break your organizing down into manageable steps you can work through. Start with areas or rooms, and go through them one at a time. This will prevent you from feeling overwhelmed, and build up the excitement as you complete each section. Set yourself a goal. Remember, it can be as simple as cleaning and organizing the closet, to a complete makeover with a whole new storage system. 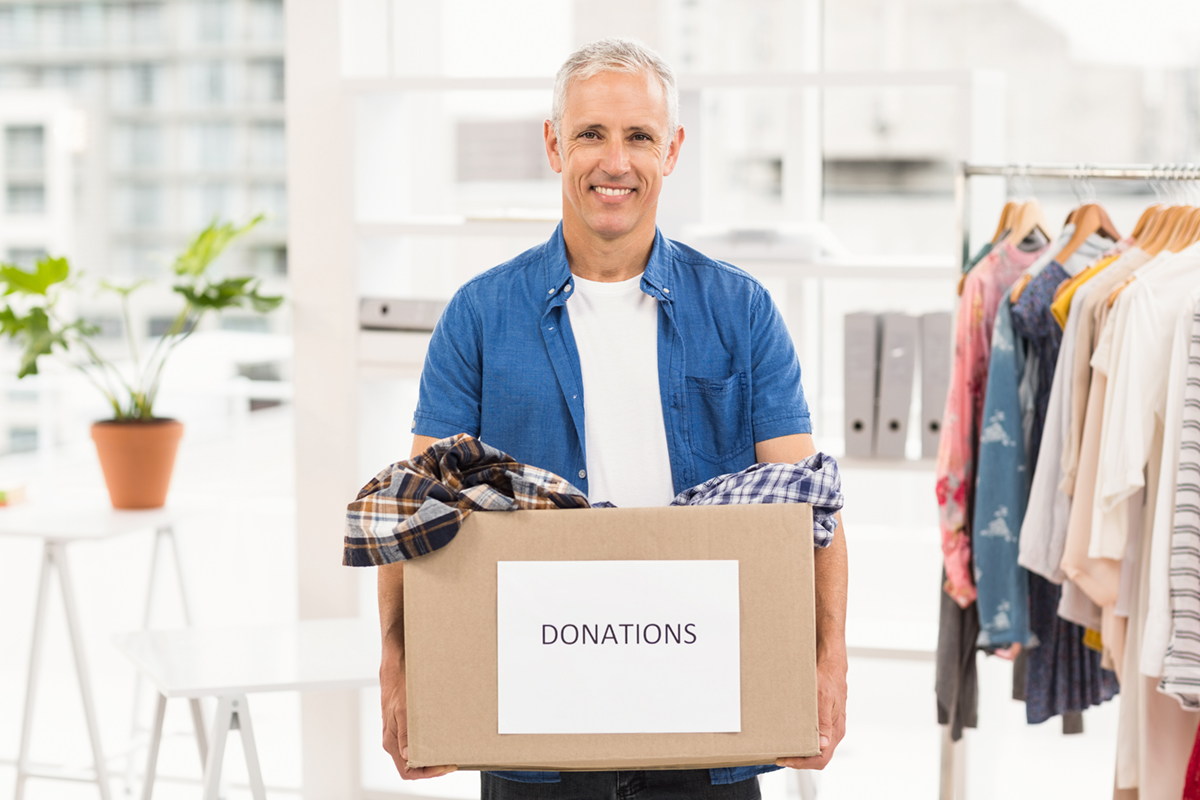 We all have items around the house that we don’t use. Some hide in the backs of drawers, others collect dust on shelves. With your plan in hand, go through each section you laid out to find items you no longer use or need. Compile these items into a donate pile. Protip- if you are unsure, box the item up, and store it. If you haven’t gone to retrieve the item in 6 months, it’s time to donate.

3 – Find a Home for Everything 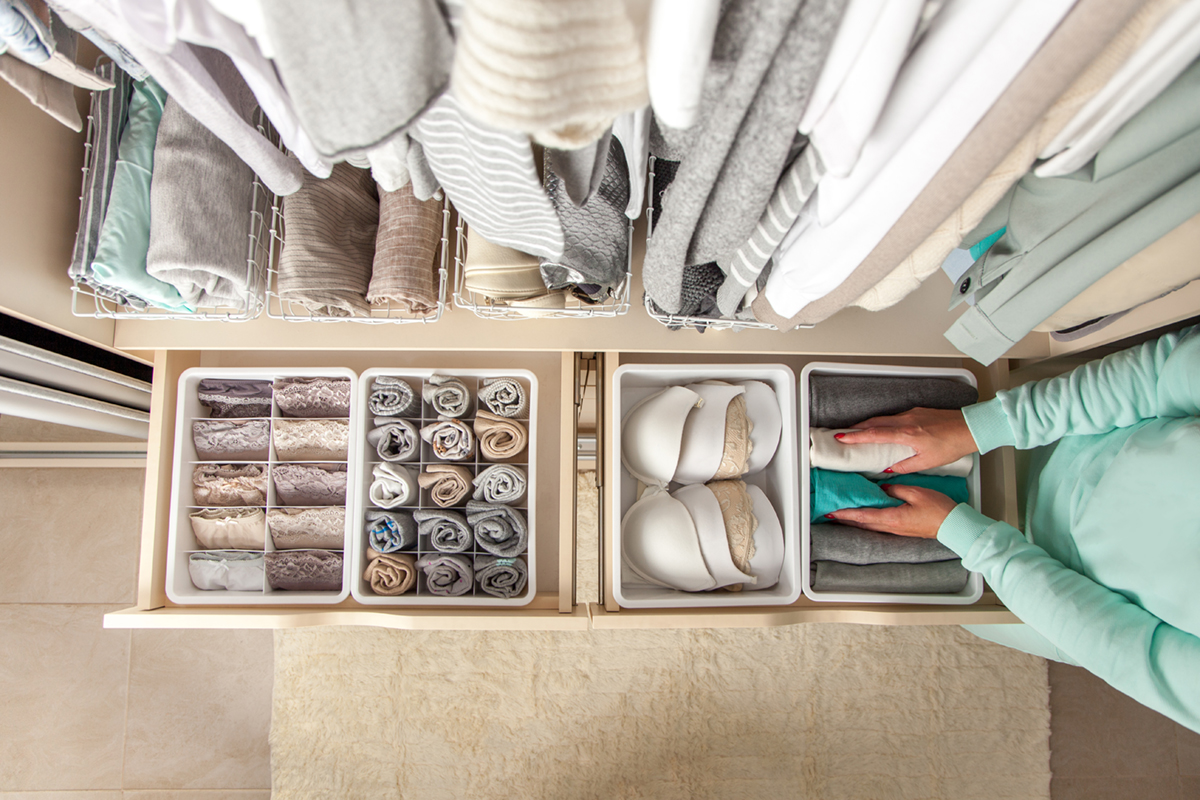 The key to an organized space, is allocating a home for everything. Once you have decluttered, the real fun begins and you can get creative. This is where your goal comes in handy. If you’re planning a full make over, it’s time to account for what type of storage you will need. Remember it’s always better to buy storage bins, baskets, bags or totes, knowing how you will use them. Design your new space with purpose, and it will feel much more Zen. There are a wide assortment of storage solutions available. With options like shelving, drawer liners, closet organization solutions, totes & bins, there is a storage solution for your aesthetic. This can seem daunting, but once all items have a home keeping organized becomes that much easier.

4 – Clean up your Digital Space 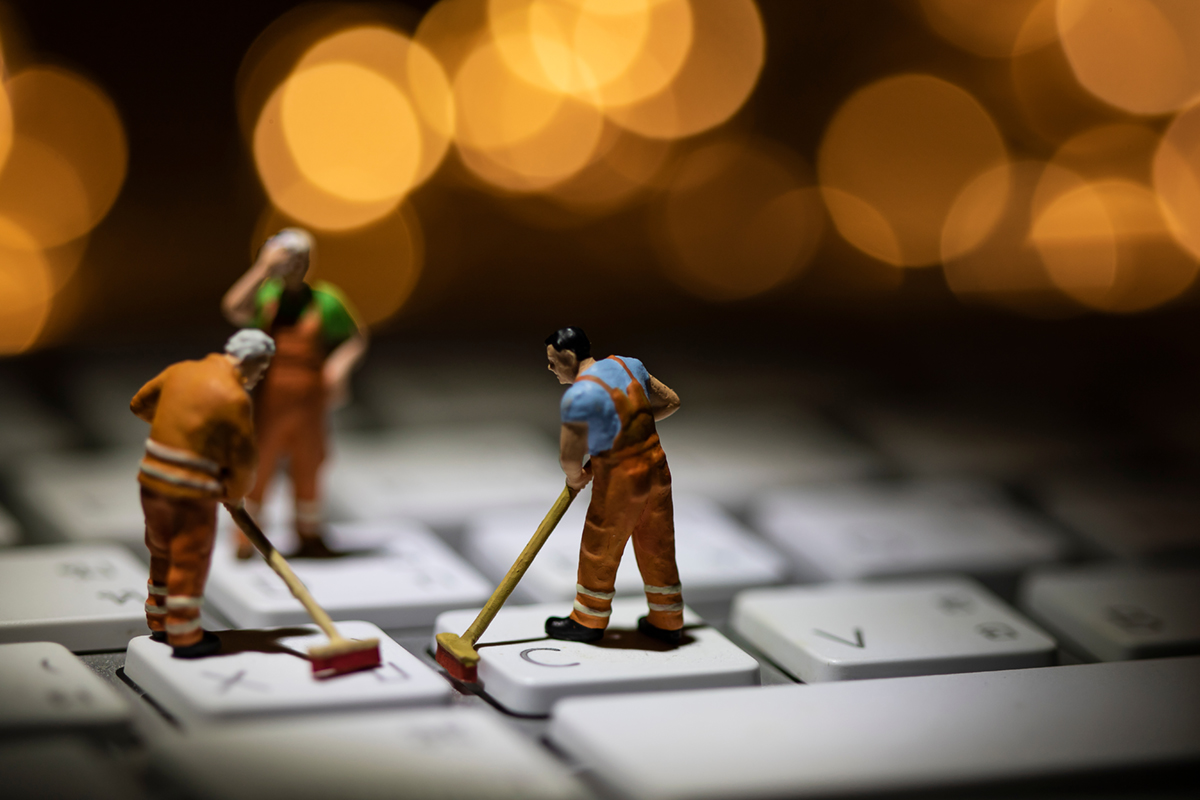 Don’t forget your computer. Most of us focus on our living space, but our digital space can become cluttered and chaotic too. Set aside some time and organize your files. Find a filing system that works for you, and be sure to back up your important files on a separate drive in the unfortunate event of a drive failure. Be sure to clean out your phone too. Go through and unload any unused apps, and be sure to back your photos up. For more on cleaning your phone, check out this blog.

Bonus – If you have a lot of old photos and mementos, consider making them into scrapbook or album, or having them scanned. This will ensure your precious memories last forever. See this blog about how our Photolab can help you digitize your old prints.

Comments: Comments Off on 4 Organization Tips for the New Year