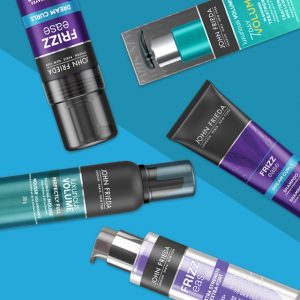 GIVEAWAY! We’re giving 3 of our followers a John Frieda Prize Pack, with everything you’ll need to transform your demanding hair into hair that demands attention!

Here’s how to enter:

2.  No purchase necessary. Limit one (1) entry per social network per contest. Limit one (1) prize may be won per household. Entries must be received no later than 11:59 pm Pacific Time on August 24, 2018. London Drugs is not responsible for entries that become lost or misdirected.

3.  Contest is open to all residents of British Columbia, Alberta, Saskatchewan, and Manitoba who, as of the date the prize draw is made: (i) have not won a London Drugs contest since August 24, 2017; (ii) have reached the age of majority in the province in which they reside as at August 20, 2018 (iii) are not employees of London Drugs, their respective advertising and promotional agencies, the independent judging organization (if any), or any family member living with any such employee.

4. The winners will be randomly chosen on the day the contest ends (see dates below) in Vancouver, British Columbia, from all eligible entries received per contest. To win, selected entrants must have correctly answered the skill-testing mathematical question on the entry for on the online entry form and must sign London Drug’s declaration and release confirming compliance with the contest rules and acceptance of the prize(s) as awarded, releasing London Drugs from liability in association with the contest and prize and consenting to the use of their name, photograph, voice and statements for promotional and publicity purposes.

5. There will be 3 (three) prize awarded to three winners: each receiving ONE John Frieda Frizz Ease Prize Pack consisting of 13 products. The prize has an estimated retail value of $150. Prize(s) must be accepted as awarded, are non-transferable and no substitutions are permitted. London Drugs reserves the right to substitute a prize of equal or greater value should any prize become unavailable for any reason. Prize will be awarded at the closest London Drugs location to the winner.

6. Selected entrants will be contacted by email, or social network they were drawn from. No correspondence will be entered into except with selected entrants. If the winner does not respond then she/he will be notified for the second time, 3 (three) days after the first notification. If the winner still does not respond within 3 days of the second notification, a new winner will be chosen in the same manner until a winner is successfully contacted.

7. The chances of winning a prize will depend on the number of eligible entries received. Decisions of the judges in respect of all aspects of this contest including, but not limited to, eligibility of entries and correctness of answers given to the skill-testing question, are final.

8. London Drugs, their respective advertising and promotional agencies, the independent judging organization, and their respective agents are not liable to an entrant in any manner relating to the contest or the awarding and use of the prize(s).

Festival season is officially in full swing! If you’re a beauty lover planning a getaway to your favourite music retreat, there are a few essentials you’ll want to pack in your bag. Our Beauty Advisors have hand-picked the best products to help you feel fresh and fabulous, even while you’re ‘roughing it’ to see your favourite bands.

Luxuriously long showers won’t necessarily be an option, but you can still keep your hair looking fresh in between washes. This dry shampoo from John Frieda will help to absorb oil and turn lackluster locks into salon-caliber, natural looking volume! Our Beauty Advisors recommend lifting hair in sections, then spraying at the roots in short, quick bursts. Use fingers to blend the fine powder into the hair.

Swap out your cotton pads and liquid makeup remover for something easier: make-up remover wipes. These wipes from Klorane require no rinsing, making them the ideal choice for festivals where running water isn’t close by. Plus, they’re biodegradable: perfect for your outdoor adventures!

It’s best to avoid thick, cakey foundations on festival trips. Instead, opt for something with natural-looking coverage that will feel more comfortable on skin throughout the day. Marcelle’s new City Tinted Cream is lightweight with just a hint of correcting colour. Plus, it has the benefit of SPF to protect skin against UVB rays throughout the day.

Feeling fresh and clean isn’t something usually associated with festival season, thanks to dusty grounds and infrequent showers. Keep a bottle of this antiperspirant spray on hand for a quick burst of floral freshness that lasts 48 hours! Don’t worry about white marks or yellow stains, the formula is invisible.

Before you take off on your festival trip, why not up your hair game? Colorista’s new Semi-Permanent Colour washes out in 4-10 shampoos, making it a fun, temporary choice for your getaway. There are 7 shades for bleached or light blonde hair, and 4 shades for brunettes who don’t want to bleach. Go all out or flirt with colour by customizing your look!

MaskerAide All Eyes on Me Hydrating Eye Gels

Long nights at concerts mean mornings will be a bit tough. Take just a few minutes to give your tired eyes some TLC by applying MaskerAide’s Eye Gels under your eyes. The gels are packed with super hydrating, brightening and firming ingredients to help soothe, de-puff and diminish the look of dark circles.

Keep your makeup stash to a minimum by choosing products that do double (or in this case, triple) duty! Our Beauty Advisors recommend taking along Mineral Fusion’s 3-in-1 Colour Stick, to add some colour to cheeks, eyes and lips. The lightweight formula will add a subtle shimmer and pretty glow to any complexion, no brush necessary.

For a fun splash of colour that will last all day, make sure L’Oreal’s brand new Infallible Paints Eyeshadow is in your bag. No makeup brushes are needed for application: our Beauty Advisors suggest using the included applicator or your fingers to apply the cream shadow. Feeling adventurous? Get creative and combine multiple colours, or keep it simple with just a swipe of colour. Once it’s dry, the shadow won’t smudge all day.

Waterproof mascara is a must. Whether sun or rain is in the forecast, it’s best to have a mascara you can trust won’t melt or run. This new fully loaded volume mascara from Maybelline comes in a waterproof formula that will boost your lashes, while defying the elements.

Long days outside in the sun may leave your skin feeling dry and dehydrated. Keep a bottle of this hydration mist close by for a quick spritz throughout the day to refresh the skin. Chamomile, white tea, burdock root and sea kelp will soothe and nourish while defending the skin against free radical damage.

Comments: Comments Off on Essentials Every Beauty Lover Needs for Festival Season