London Drugs Survey: Most Western Canadians Planning to Get the Flu Shot This Season

Western Canadians largely believe in the benefits of getting flu shots, with the majority of residents planning to get theirs this flu season.

Three-in-five (59%) Canadians in BC, Alberta, Saskatchewan and Manitoba say they are likely to get the flu shot for the 2018/2019 season, including nearly all of those (98%) who received last year’s vaccine—a number that is consistent across all of the provinces. While this number seems promising, there is still a large proportion (37%) who aren’t planning on getting this year’s vaccine.

Common misconceptions prevent many from getting the flu shot

While seven-in-ten Western Canadians (71%) report having gotten the flu shot in the past, the most common reason provided among those unlikely to get immunized this year, is the belief that the vaccine is ineffective or only works for previous strains of the virus (38%, a number that that climbs to 45% in Saskatchewan).

“This is an unfortunate and potentially deadly belief. The vaccine is always updated to protect against the viruses that health experts believe will be circulating during the upcoming season and protects against multiple strains. By getting the flu shot, you not only protect yourself, but you protect others who could have life-threatening complications from catching the flu,” says Gianni Del Negro, a Pharmacist at London Drugs.

This year’s seasonal flu vaccine protects against multiple strains of both influenza A (H1N1 and H3N2) and influenza B.

“It’s a myth that if you are a healthy person then you don’t need a flu shot. Even if you are in good health, it’s important to get immunized to prevent the spread of illness to high risk individuals such as newborns, young children, pregnant women, and adults with chronic medical conditions,” says Del Negro.

Seven-in-ten (70%) also agree that the vaccination can have negative side effects. British Columbians are significantly less likely to believe this (60%) than their Western counterparts: Saskatchewan (68%), Manitoba (71%) and Alberta (71%).

“It is impossible to contract the illness from the vaccine itself because they are made with viruses that have been inactivated and are therefore not infectious. Most people don’t have reactions to the flu vaccine; those who do may have minor soreness, redness or swelling at the injection site,” says Del Negro. 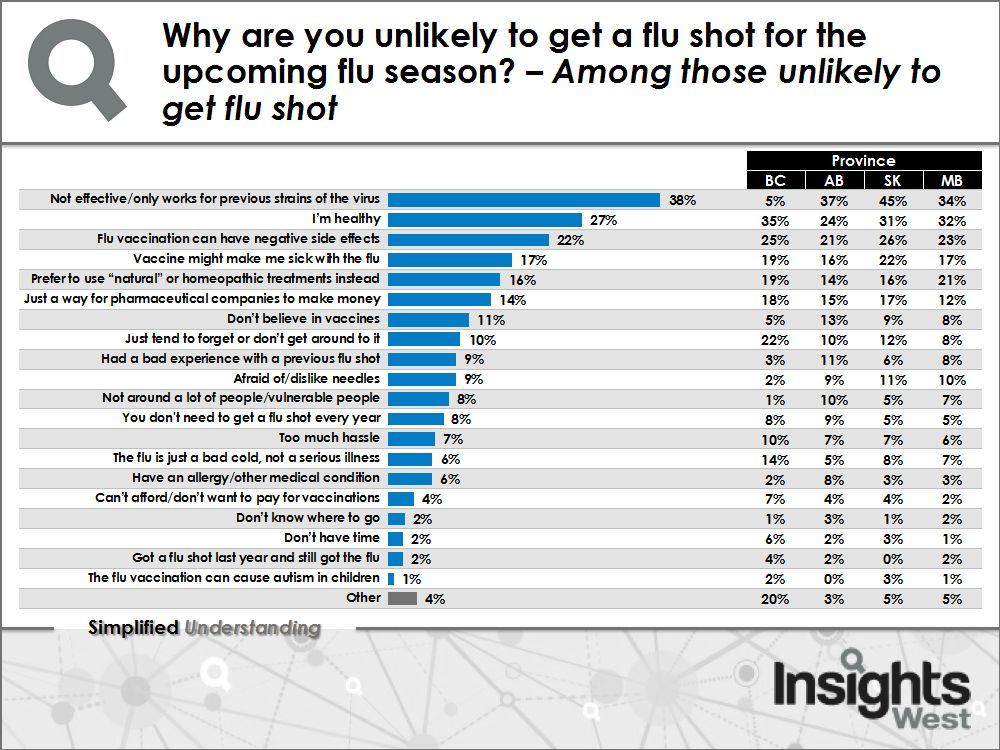 Despite these misconceptions, at least three-in-four Western Canadians agree that it is important to get the flu vaccination every year in order to help protect those who are more vulnerable to serious flu illness (76%) and feel that getting the flu vaccination each year is a responsible way to take care of both your own health and the health of others around you (75%).

However, many Western Canadians are unaware of how devastating the influenza virus can be. Only half (49%) knew that the flu causes approximately 12,200 hospitalizations and 3,500 deaths in Canada each year. 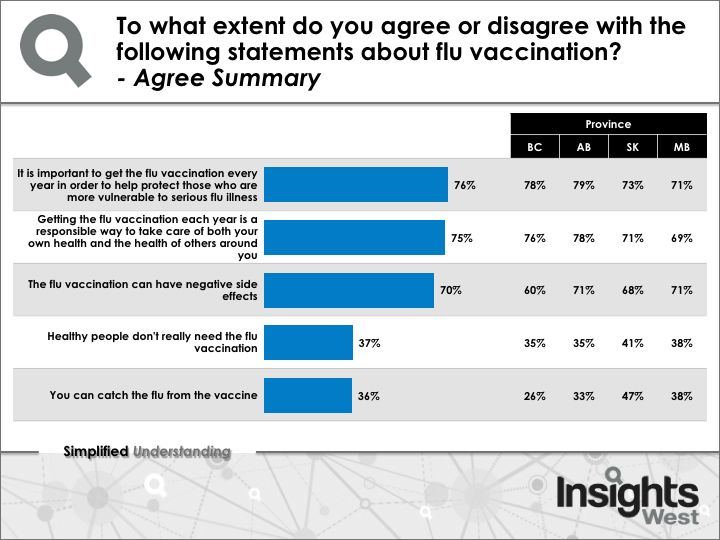 Knowledge and awareness about flu shots is high

Overall, Western Canadians are highly aware of several facts related to flu vaccinations. Almost nine-in-ten know that flu vaccinations are available free of charge for many Canadians (89%), are available at most pharmacies (88%), and that Health Canada recommends Canadians protect themselves from the flu by being vaccinated each year in the fall (also 88%). More than three-in-four are also aware that pharmacists can administer the flu vaccine (85%) and that the vaccine helps prevent hospitalizations and saves lives (78%).

Flu shots are widely available, by appointment or walk-in, across Canada. Western Canadians who are likely to get vaccinated this season are largely planning to get theirs at a pharmacy (41%), public flu clinic (16%), or doctor’s office (13%).

“Simply by getting a flu shot at London Drugs you can make a global impact, providing life-saving vaccinations to children worldwide, while taking care of your own health needs and potentially saving the lives of people in your own community as well,” says Del Negro.

For every flu shot administered at London Drugs pharmacies this year, a lifesaving vaccine will be donated to UNICEF Canada to immunize children in another country. The vaccination donation campaign is in partnership with I Boost Immunity (IBI), an online immunization advocacy network.

Flu shots are conveniently available seven days a week by appointment or on a walk-in basis at any London Drugs location. To learn more about getting the flu shot at London Drugs, visit: LondonDrugs.com/flu

Results are based on an online study conducted by Insights West from September 14th to 26th, 2018 among a representative sample of 2,144 British Columbia adults.  The data has been statistically weighted according to Canadian census figures for age, gender and region. The margin of error—which measures sample variability—is +/- 2.12 percentage points. Discrepancies between totals are due to rounding.

Comments: Comments Off on London Drugs Survey: Most Western Canadians Planning to Get the Flu Shot This Season