The NEOWISE comet is viewable for the month of July across western Canada, and we are here with a few helpful tips to help you make the most of it! Although it will only come within about 103 million kilometers of earth, it will be visible to the naked eye in the north western night sky. To get a better view, a pair of binoculars will help get in closer. If you want to really see it up close and personal, consider using a telescope. We have a wide range of options a variety of price points available in-store and online.

If you’re looking to capture images of the Neowise comet in the night sky, for optimal results you will want to use a mirrorless or DSLR camera. Surprisingly, you can capture beautiful images even with a kit lens. If you attach a telephoto lens, you’ll be able to get even closer. Shooting in manual mode with a high ISO and slow shutter speed will ensure to let in as much light as possible and have the control to capture the image you want. Check out the examples below captured by LD Expert Tim Y earlier this month in Saskatoon Saskatchewan. We’ve included the camera settings, and focal length he used to show what can be captured with everything from a kit lens at 55mm to a 600mm telephoto. Hopefully this can help you to create your own striking images! 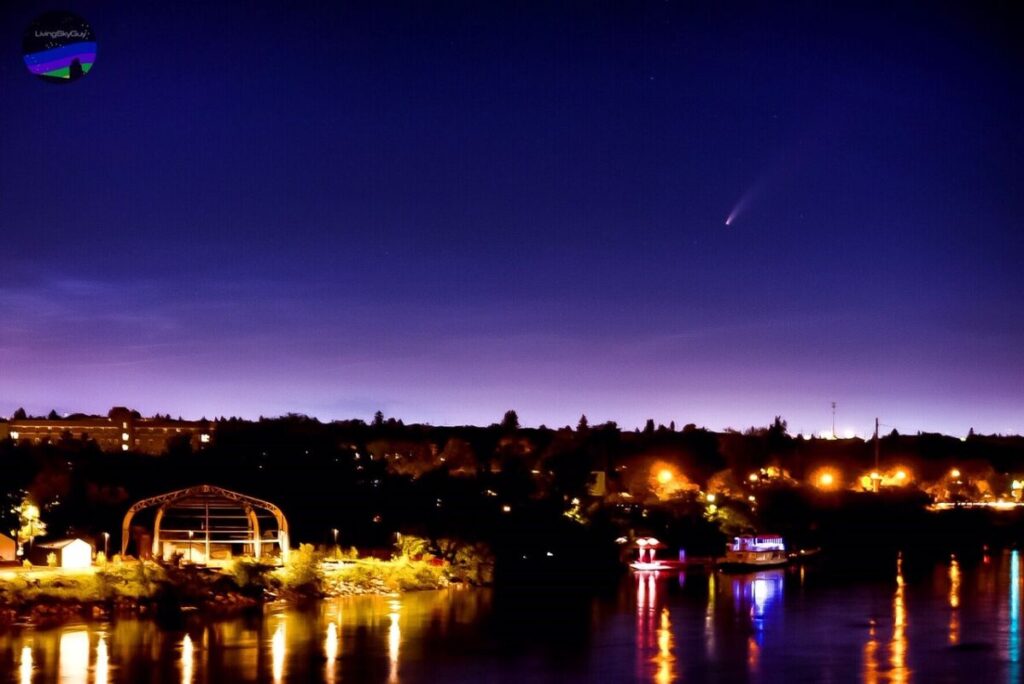 Taken in downtown Saskatoon. 55mm lens, 5 seconds, F4, 1600 ISO This is an approximation of how it would look to the naked eye. 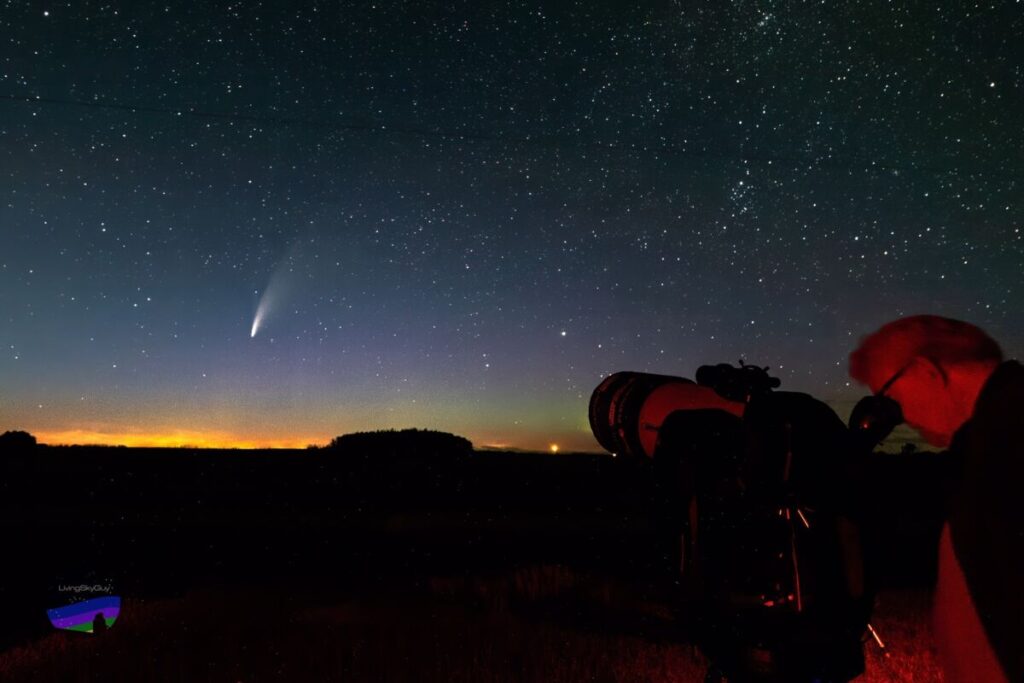 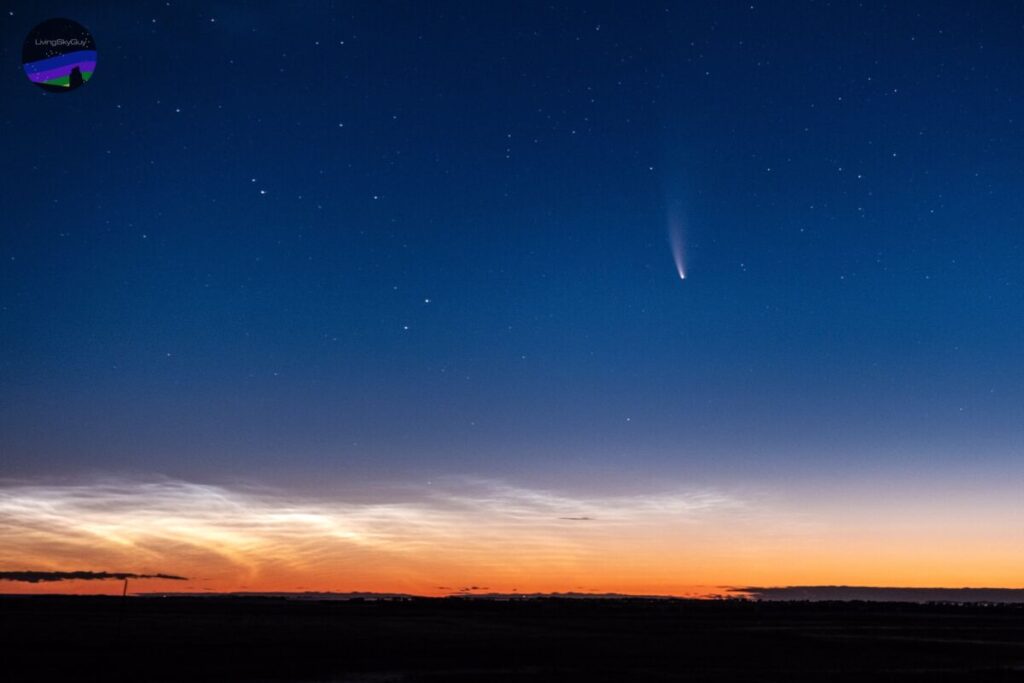 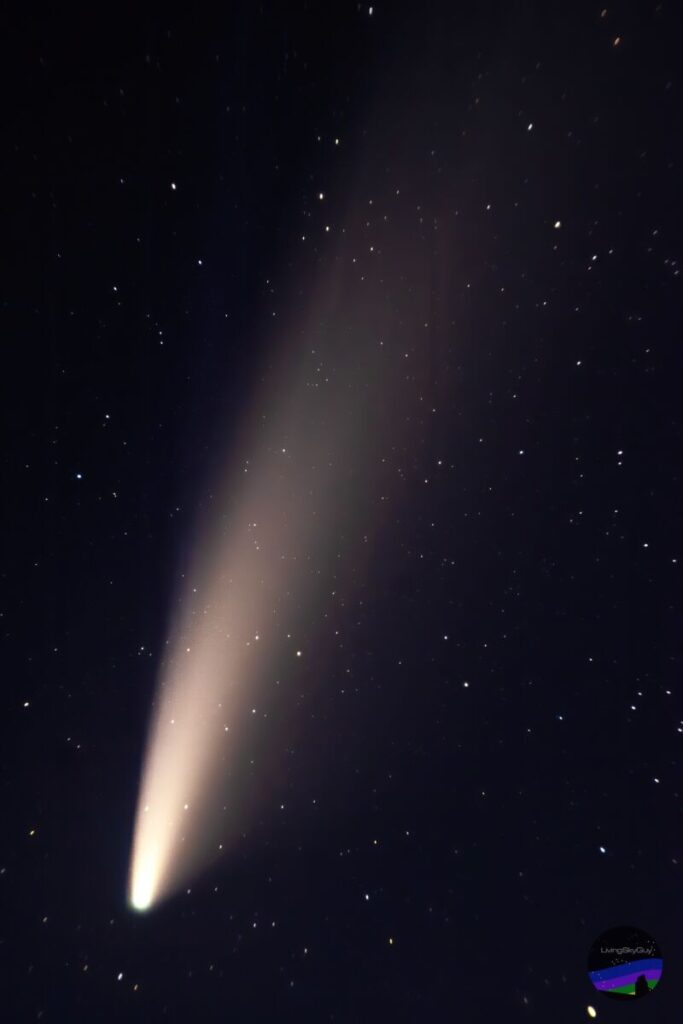 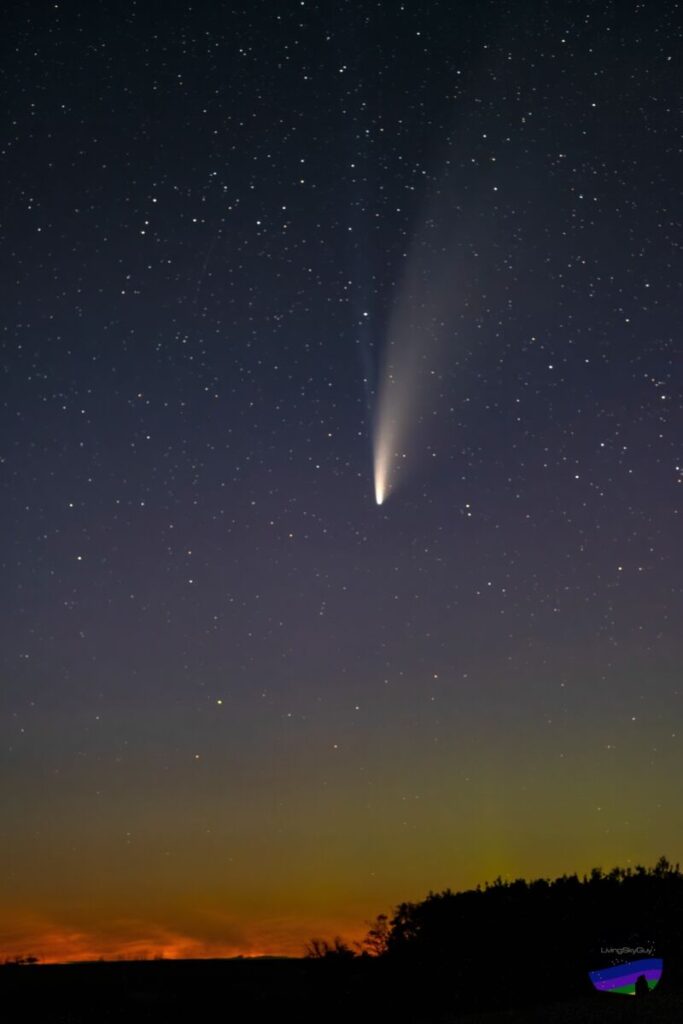 Whether you choose to view or capture, we have the tools and accessories to get the most out of the experience.
“Remember, there is a big, beautiful sky out there and there is always something interesting to capture with your camera. Take the time to head out where the world is dark, the sky is clear and the memories are just waiting to be made and captured.” Tim Y

Comments: Comments Off on NEOWISE Comet – Tools to See and Capture

How to Observe and Photograph Mars in Opposition 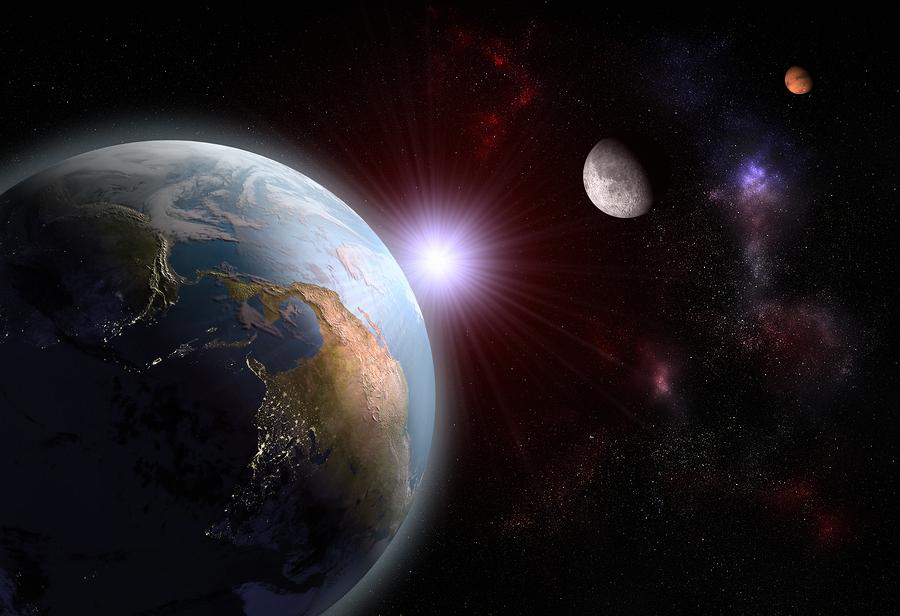 Summer is here and the days are long… but the nights are short! For someone like me who enjoys the night sky, this time of year is a mixed blessing. Warm and pleasant evenings (between mosquito attacks) but a very short window to actually see some dark skies—usually less than a couple of hours in the middle of the night.

This summer however we have three very bright objects that are visible in even a bright and light-polluted sky. They are the planets Venus, Jupiter and Mars. Venus is the very bright light that is straight west and easily visible about 20 minutes after sunset. 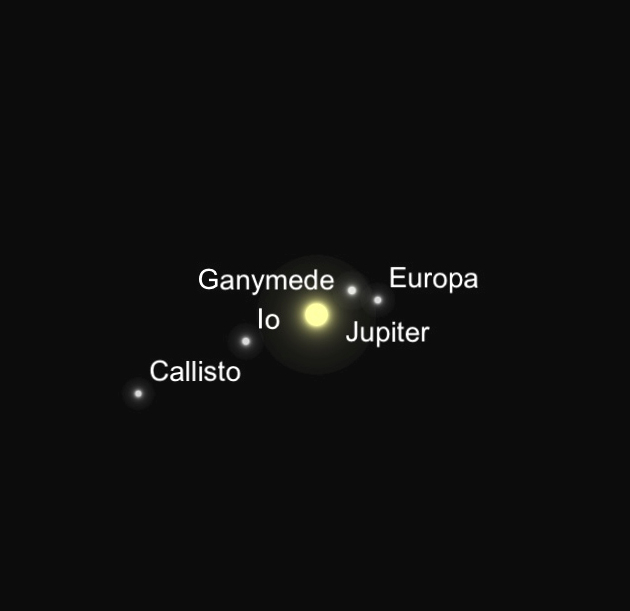 After you have spotted Venus, turn your gaze to the south and the brightest object you will see is the planet Jupiter. If you are in an area of dark skies and have let your eyes get used to the
dark (which takes about 20 minutes) point a pair of binoculars to Jupiter and you will have a good chance to see up to four of its moons as well! Io, Callisto, Europa and Ganymede will appear as
pinpoint objects flanking the giant planet. Their positions change daily as they orbit Jupiter.

The best type of binoculars for this kind of viewing would be in the 10×50 range like Nikon Aculons. They offer a good magnification that can still be handheld along with great light gathering capability at an affordable price. Add an optional tripod mount to attach them to your tripod and you will even be able to easily share the view with friends and family!

The real “star” this summer is the planet Mars

On the evening of July 27 Mars will be in opposition to Earth. What that means is the orbits of the Sun, Earth and Mars will form a straight line that night. As the Sun sets in the west Mars will rise in the east. It will also appear to be much brighter than usual as it is making a closer than normal approach to the Earth. This is the closest our planets have been together since 2003.

On that evening you will see quite a grouping of objects. The illustration shows what the sky will look like around 11:30 pm. Left to right, you will see a nearly full Moon with Mars to the bottom right of it. Scan further to the right to you will see the planet Saturn right in the heart of the Milky Way. 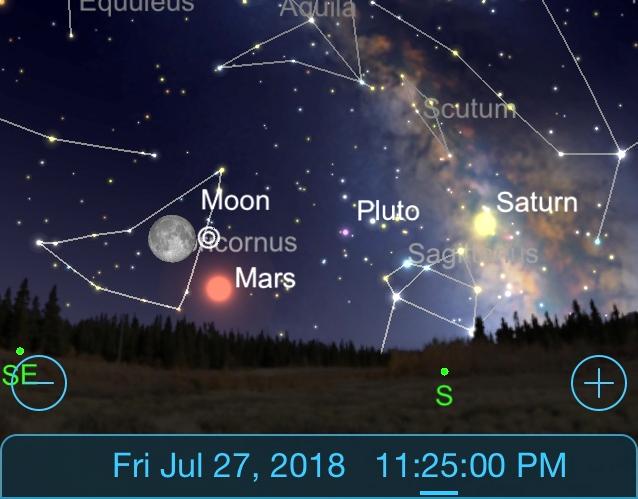 The best way to view the event

For best results in viewing this event, if possible, get away from the city. The city lights do an amazing job lighting up the town but they play havoc with being able to enjoy the sky. Although the moon and these two planets can be seen in most urban environments, the view is much better and you will see many more stars the further away from town you can get.

Viewing with the naked eye, you will be seeing a good overall view of the event. If you look carefully you have a good chance to see that Mars is actually a redder looking object than the surrounding stars. The best way to do this is to use a technique called “averted vision.” Instead of looking directly at Mars, centre your vision just to the right of it and use your peripheral vision to view the planet. This area of the eye is a bit more sensitive and will give you a better chance of seeing the colour.

A good pair of binoculars, like these Nikon 10x50s, will show you the planet more as a small disc and will also help bring out the red colouring. With a telescope you will get an even better view. Depending on the atmospheric conditions (the less the surrounding stars “twinkle” the better the conditions are) and the quality and magnification of the telescope, you may also be able to see some areas of the planet will appear darker and lighter.

Note: no matter what you use to look at Mars, do not expect to see a “text book” quality view of the planet. You will need far more advanced equipment than this to enjoy that kind of view.

How to photograph the red planet

The note I just gave you also applies to photographing the planet. The more detailed shot you want, the more advanced the equipment and technique you will need. What you will need though is a DSLR or mirrorless camera and a good tripod. My goal for capturing the opposition is to get a couple of images. 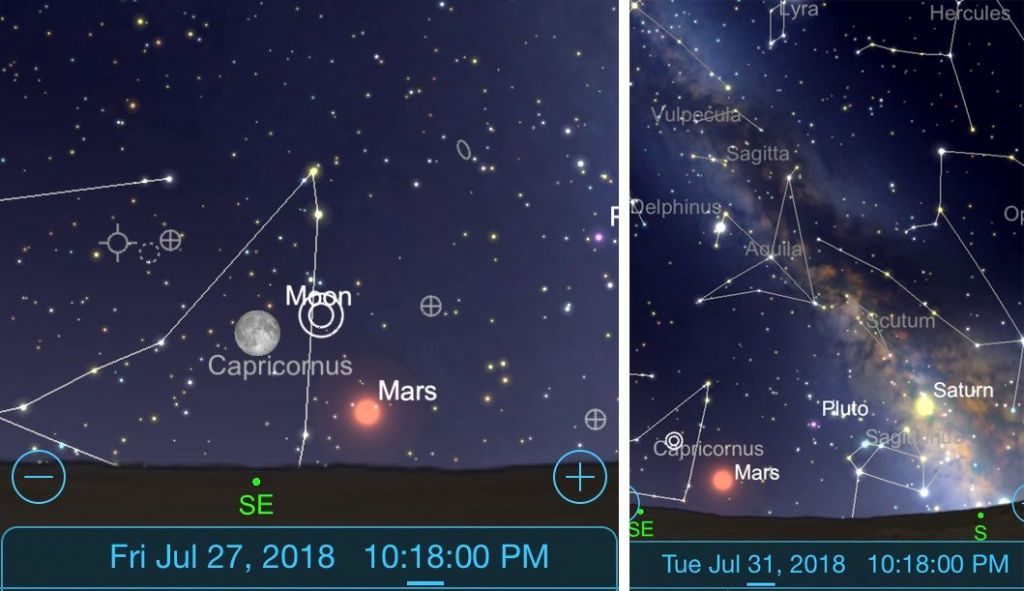 For the first one, on July 27 about an hour after sunset Mars will rise in the SE sky with the moon above and to the left of it.

For the second image, I will wait until the evening of July 31. This is just past the opposition but Mars will still be very bright. What will be missing though for the first part of the night is the Moon. I want to avoid the moon in order to be able to better capture more stars. The brightness of the moon will easily wash them out.

Remember, there is a big, beautiful sky out there and there is always something interesting to capture with your camera. Take the time to head out where the world is dark, the sky is clear and the memories are just waiting to be made and captured.