How many of these 11 jaw-dropping resort towns have you seen in wintertime? Take advantage of the beautiful season—pull together some warm clothes, throw your skis or snowboard in the car, and hit the road. The alpine landscape of Western Canada awaits. 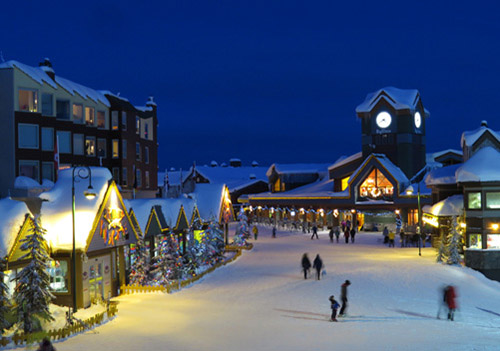 It’s hard to find a person who’d say a bad word about Big White, 45 minutes outside Kelowna. Neither too big nor too small, it’s the resort where you’re likeliest to spot Goldilocks laying fresh tracks in high-mountain powder. Other good points: Most of Big White’s accommodations are ski-in/ski-out—and the village has more than enough après options to keep your party fed, relaxed, and entertained. 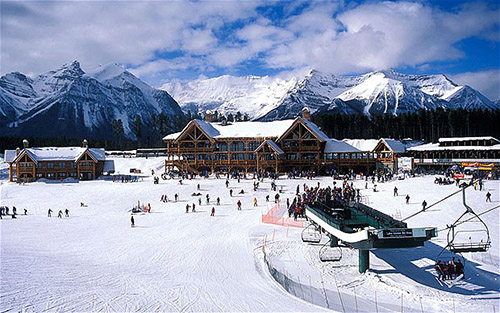 Iconic—yes. Legendary—absolutely. Overrated…maybe? Lake Louise is the go-to resort for Calgary, two hours to the east. Louise has looks on her side. She’s nestled amid the grandeur of Banff National Park, arguably Canada’s single most beautiful place. Mind your skis and boards, though. Snow coverage is inconsistent, and rocks and ice are common. 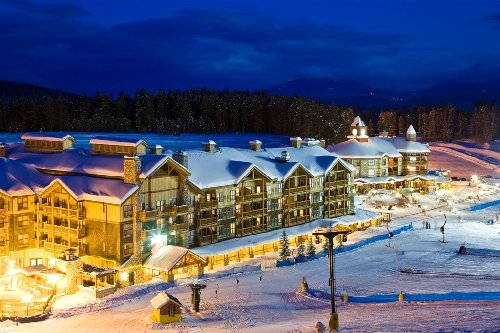 If you prefer family time to partying late and loud, you’ll find plenty to admire in the little mountain town of Kimberley. The resort—renowned for its tree skiing, groomers, moguls, and Purcell powder—is sure to please almost everyone. (If you love the steeps, look elsewhere.) There isn’t much village to speak of, so if you’re keen on evening entertainment, try the Brooklyn-inspired Pedal & Tap, in Kimberley town. 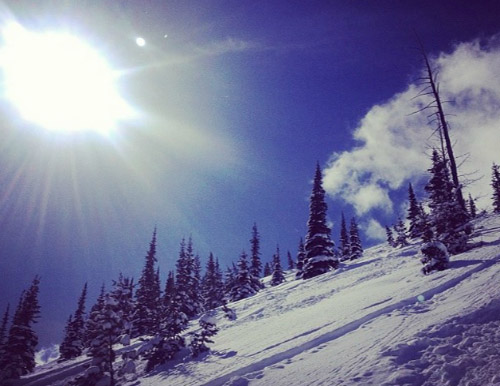 Castle Mountain, sleepy and secluded, perched on Alberta’s southern cape, boasts two things that always please skiers: steep grades and no crowds. If you’re nostalgic, you’ll love the folks with skinny skis beside lift queues— “Single!” The resort is home to one of Western Canada’s best après-ski spots, the T-Bar Pub and Grill. 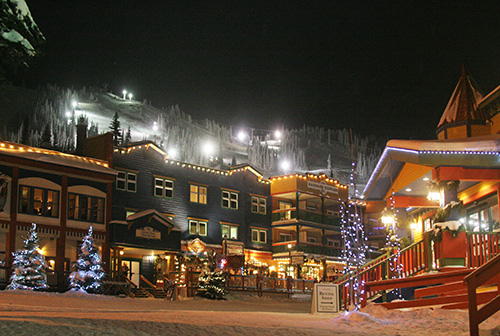 The ski resort of Silver Star, known for its colourful architecture and cultivated quaintness, is straight out of Central Casting. But looks aren’t all it has going for it. The resort offers over 3000 acres of terrain while maintaining the feel of a smaller village and hill. Silver Star boasts better snow than Big White, the hill with which it battles for regional supremacy. (They’re a 90-minute drive apart.) Don’t miss a night out at the Red Antler, in the central village. 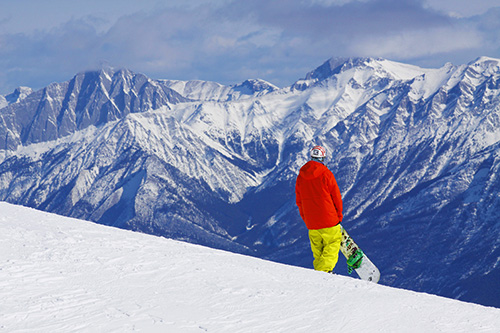 Whether you’re there seeking groomers or steep, treed chutes, you’ll love Marmot Basin. It’s arguably Western Canada’s least known top-flight resort. Marmot’s relative remoteness—four hours from Edmonton, five each from Calgary and Kamloops—translates into fewer people on the slopes. Make sure also to spend time being charmed by the nearby town of Jasper. 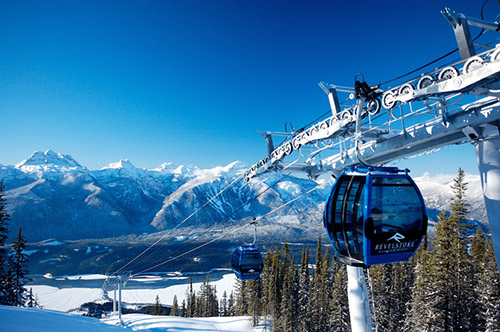 Revelstoke is arguably 2017’s best destination for Canadian skiers and boarders. The mountain boasts the North American’s greatest vertical—5620 feet. Alongside the mammoth mountain is a burgeoning dining scene and modish atmosphere. The varied terrain, huge vertical and great snow make Revelstoke a seductive town to consider visiting in 2017. 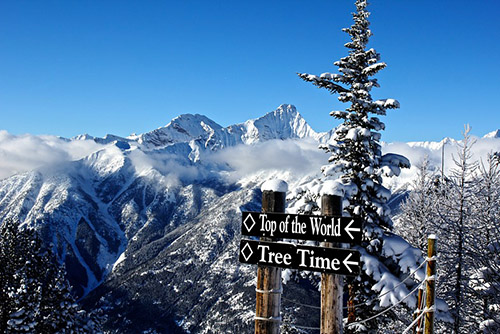 Just 30 minutes from Invermere, this village everything the mountain lover could want. To wit: lots of hotels with hot springs, diverse family activities, good restaurants, and a general store. Panorama boasts the sixth-greatest vertical drop in North America, behind only such giants as Revelstoke, Whistler, and Jackson Hole, Wyoming. 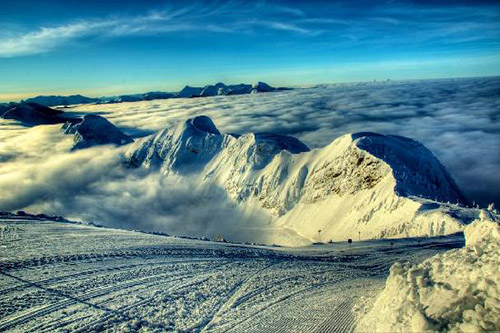 After a few years of being British Columbia’s worst-kept secret, Fernie’s ridiculously long queues have shrunk and the scene is back to normal. (Shhh…don’t tell anyone.) Fernie is a perpetual contender for “best of” in a number of categories: powder, trees, steeps, terrain. 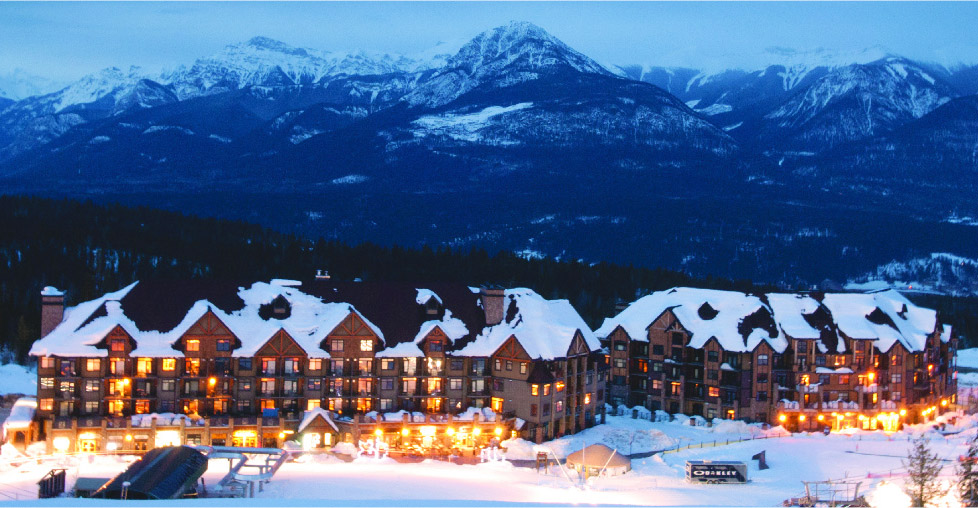 The old railway town of Golden, B.C.—just 80 km. from the Alberta border—may lack the cosmopolitan lustre of towns like Banff and Whistler, but the locals don’t mind. In fact, they’d prefer you don’t spread the word. The skiing is steep and excellent, with gorgeous views. If you like the rustic feel of small towns, Golden has charm galore. (That doesn’t mean the Eagle Eye, atop Kicking Horse, won’t furnish a sommelier to help you to pair a pinot with your truffle fries and duck confit.)

Size matters. With more than 200 trails and 8,100 skiable acres, Whistler Blackcomb has terrain to match any appetite. Unsurprisingly, the Whistler area retains a deep lustre from the 2010 Olympic Games. Not that it needs it. For years, the resort has been voted North America’s best overall. Even for visitors that don’t ski or board, ascending either Whistler or Blackcomb repays the effort. The engineering marvel that is the Peak 2 Peak gondola—built in 2009—connects one summit to the other. Trip Advisor calls it Canada’s No. 1 landmark.

Comments: Comments Off on 11 Canadian Mountain Resorts You’ll Want to Cozy Up To This Winter

Previous Post: Your emergency preparedness kit: Essential items for a range of disasters