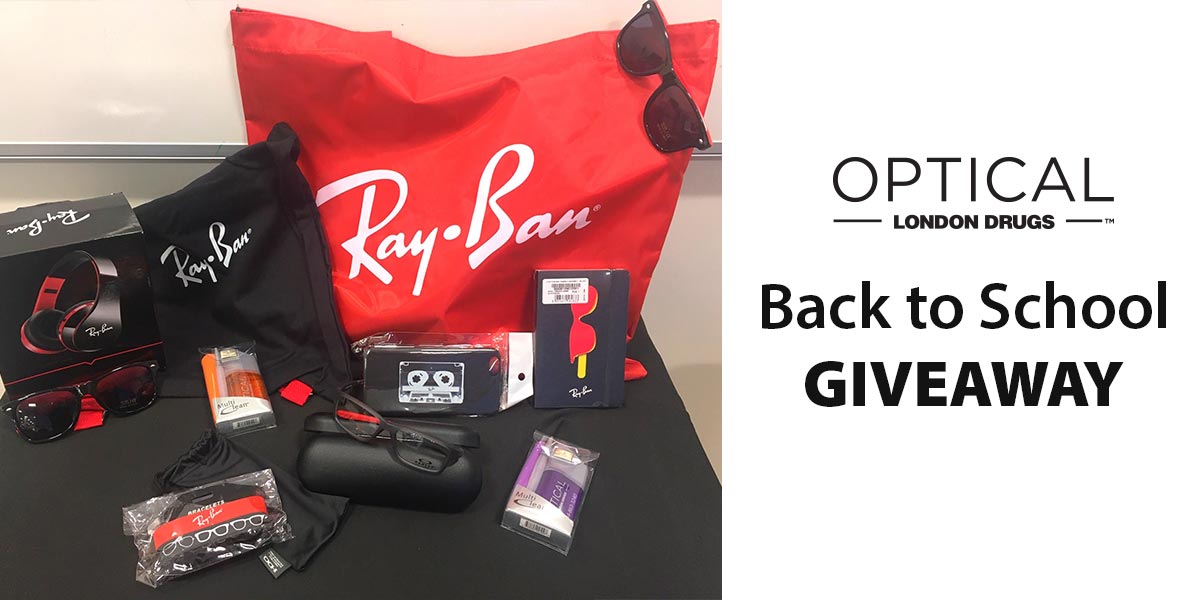 1) The Optical London Drugs Back to School Giveaway (the “Contest”) is open to all residents of British Columbia, Alberta, Saskatchewan, and Manitoba who, at the time of Contest entry: (i) have not won a London Drugs contest since September 10, 2019; (ii) have reached the age of majority in the province in which they reside at (nineteen (19) in British Columbia, and eighteen (18) in all other provinces) (iii) are not employees of London Drugs, their respective advertising and promotional agencies, the independent judging organization (if any), or any family member living with any such employee. The Contest is subject to all applicable laws and regulations and is void where prohibited. Participation constitutes entrant’s full and unconditional agreement to these Terms and Conditions which include the Official Rules of the Contest. Winning a prize is contingent upon fulfilling all requirements set forth herein.

2) To enter the Contest, purchase any youth-sized glasses (for children aged 13 and under) at any Optical London Drugs locations between August 10, 2020 TO September 10, 2020 11:59pm Pacific Time. Entries for all eligible purchases will be automatically generated and entered into the draw by London Drugs.

3) No purchase necessary. To enter without purchase, the entrants can mail in their name, phone and email address, along with a handwritten letter between 200 and 500 words about why they would like to win a RayBan Swag Bag with value up to $300. Mail the entry to Optical London Drugs Back to School Giveaway at London Drugs Morgan Crossing #130-15850 26th Ave, Surrey BC, V3S 2N6 or drop them off at any London Drugs Optical location. No purchase entries must be postmarked by no later than contest end date of September 10, 2020 11:59pm Pacific Time. Each entry needs to be in a separate envelope and will count as a single entry.

4) Limit one (1) entry per purchase Limit one (1) prize may be won per household. Purchases must be made no later than September 10, 2020 11:59pm Pacific Time. London Drugs is not responsible for entries that become lost or misdirected. All entries become the property of London Drugs Limited and will not be returned.

5) The winners will be randomly chosen on the day the contest ends (see dates below) in Vancouver, British Columbia, from all eligible entries received per contest. To win, selected entrants must have correctly answered the skill-testing mathematical question on the entry for on the online entry form and must sign London Drug’s declaration and release confirming compliance with the contest rules and acceptance of the prize(s) as awarded, releasing London Drugs from liability in association with the contest and prize and consenting to the use of their name, photograph, voice and statements for promotional and publicity purposes. Only one prize may be won per person and per household. In the event that any selected entrant incorrectly answers the skill-testing question or is otherwise unwilling or unable to comply in full with these rules, a new entry will be drawn.

6) There will be 4 (four) prize(s) awarded to 4 (four) winners: 3 winners receiving a RayBan Swag Bag (value up to $250) with one winner receiving a RayBan Swag Bag and a pair of Bluetooth wireless headphones (value up to $300). Prize(s) must be accepted as awarded, are non-transferable and no substitutions are permitted. London Drugs reserves the right to substitute a prize of equal or greater value should any prize become unavailable for any reason. Actual value of each prize may fluctuate based on pricing of each prize component at time prize is redeemed. Prize will be awarded at the closest Optical London Drugs location to the winner and the winner must attend in person to pick up the prize.

7) Selected entrants will be contacted by email, or social network they were drawn from. No correspondence will be entered into except with selected entrants. If the winner does not respond then she/he will be notified for the second time, 3 (three) days after the first notification. If the winner still does not respond within 3 days of the second notification, a new winner will be chosen in the same manner until a winner is successfully contacted.

8) The chances of winning a prize will depend on the number of eligible entries received. Decisions of the judges in respect of all aspects of this contest including, but not limited to, eligibility of entries and correctness of answers given to the skill-testing question, are final.

9) London Drugs, their respective advertising and promotional agencies, the independent judging organization, and their respective agents are not liable to an entrant in any manner relating to the contest or the awarding and use of the prize(s).

10) This Contest is governed by the laws of the Province of British Columbia and to the extent applicable the laws of Canada. This contest is subject to all federal, provincial, and municipal laws and regulations. By entering this Contest, the entrant consents to the collection of all personal information included on their entry and agrees to the use and disclosure of such information by and between London Drugs and their agents. The winner(s) also agrees to the collection, use and disclosure of their name, entry, photographs, voice and statements for London Drugs’ publicity purposes without further compensation. All personal information collected from entrants will be used only for the purposes of administering the contest and for marketing and promotional purposes as contemplated by these rules; under no circumstances will any personal information be sold or rented to third parties. All personal information collected by London Drugs will be kept in accordance with the privacy policy of London Drugs, which can be viewed at www.londondrugs.com, and in accordance with all applicable privacy laws.

11) This Contest is in no way sponsored, endorsed, or administered by, or associated with, Facebook, Instagram, Twitter or any other social media platform which may be used to communicate this Contest. All such entities are completely released of all liability by each entrant in this Contest. Any questions, comments or complaints regarding the Contest should be directed only to London Drugs.

12) London Drugs is not responsible for any failure of any website during this Contest, nor is it responsible for any problems or technical malfunctions of computer online systems, servers, access providers, computer equipment, software or any e-mail, online or internet entry lost due to technical problems or traffic congestion on the internet or at any website or any combination thereof, including any injury or damage to an entrant’s or any other person’s computer or property related to or resulting from playing or downloading any material in the promotion.

13) The right is reserved by London Drugs to terminate this contest, in whole or in part, and/or modify, amend or suspend the contest, and/or these rules in any way, should any cause beyond the reasonable control of London Drugs or its agents affect the proper administration thereof.

Comments: Comments Off on Optical London Drugs Back to School Giveaway