Summer is here and it looks like it’s going to be a hot one! What better time to sit inside with the air conditioning on and play some new games! There are eleven new titles landing in in June across the PlayStation, XBOX, Switch, and Windows platforms. Let’s take a closer look at them now!

Tekken is back! Tekken 7 is the ninth entry (because video games) in the hit fighting franchise. The game has been making the rounds on the arcade scene since last year and now finally arrives on PlayStation 4 and XBOX One. All your favourite characters return plus an additional 10 characters are added to the cast. There are also two new fighting mechanics to master: Rage Art, which allows you to land a critical blow at the expense of other power ups, and which allows you to attack your opponent even while they are attacking you.

Tekken 7 is out this Friday, June 2nd, and you can pre-order your copy today at LondonDrugs.com

If you love great games, you probably love Don’t Starve. The hit indie survival game is coming to PlayStation 4 and XBOX One in the Don’t Starve Mega Pack, which includes the original game plus the multiplayer Don’t Starve Together expansion, Regin of Giants expansion, and the Shipwrecked expansion.

This is a perfect opportunity to get into the game for hte first time or to pick it up in its most polished form. The Don’t Starve Mega Pack is out on June 6th. Reserve your copy at London Drugs.com now!

The Elder Scrolls Online: Morrowind will be released on June 6th for Windows, PlayStation 4, and XBOX One. Reserve your copy at LondonDrugs.com

Lightning McQueen is coming to your game console! Cars: Driven to Win features all your favourite characters from Pixar’s fan favourite franchise in a racing game not unlike Mario Kart or Blur, where you collect and use power ups and attacks to gain advantage during the races. Featuring 21 race tracks and 6 game modes, Driven to Win promises to to keep you playing against your friends!

Cars: Driven to Win will be released on June 13th for PlayStation 4, XBOX One, and Nintendo Switch. Pre-order your copy at LondonDrugs.com today!

Switch owners, here comes a new great social game for you! Nintendo’s Arms puts you in the ring against an opponent, each with your own unique set of extending arms. There are multiple sets of arms to fight with, each with their own unqie advantages and disadvantages. Use them to put your opponent out of the ring one on one, or two vs two! Stand up with your JoyCon controllers and battle your friends!

Arms will be released on June 16th, and you can reserve your copy at LondonDrugs.com 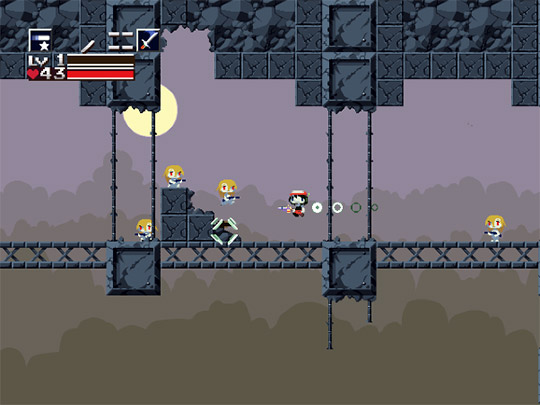 You awaken on a mysterious, cavernous, floating island. The local inhabitants, the peaceful Mimigas are being tormented into fighting a war for the megalomaniacal Doctor in his quest to take over the world, and you’re just the hero to stop him! Already available on a variety of platforms, Cave Story is coming to the Nintendo Switch this month.

Cave Story will be released for the Switch on June 20th.

Do you love horror movies? They we have a game for you! Dead by Daylight drops four players into a classic horror movie style enclosed location. An abandonded junk yard, a corn field, an asylum, and the like. 3 players are the survivors, they play in a third-person perspective and have to elude the fourth player, the killer, who plays from a first person perspective.

There are several survivors and killers you can play as (including Laurie Strode and Michael Myers!), each with their own unique perks and abilities. The goal for the survivors? Last as long as you can. The goal for the killer: don’t let them.

Dead by Daylight arrives on the PlayStation 4 and XBOX One on June 20th.

The next chapter in the Final Fantasy saga is here. Final Fantasy XIV Online: Stormblood is the second major expansion pack for A Realm Reborn, and focusses on the liberation of two city states from the Garlean empire. The expansion will also include new raids and zones, add new swimming gameplay elements, as well as two new jobs. PlayStation 3 players take note, the release of Stormblood will also mark the end of PlayStation 3 support for the game.

StormBlood will arrive on June 20th both on it’s own and as part of a bundle with the original game and Heavensward expansion pack. Make sure to reserve your copy now!

A young seedling, Tethu, must build an oasis in a harsh desert in order to find his lost older brother who has been kidnapped by the forces of chaos. He must forage for new materials while exploring caves and dungeons, and eventually gains help on his quest, all the while earning in game currency to build up his oasis. Ever Oasis is the latest RPG adventure game for the Nintendo 3DS and will be available on June 23rd.

Micro Machines World Series lands on June 23rd for PlayStation 4 and XBOX One.

Here’s a game for the golf lovers in your life. The Golf Club 2 lets you play on thousands of pre-built golf courses and build your own. The more you play, the more winnings you earn, the fancier you can make your course. Invite other players to join your team, expand your society, and advance your rank in a lush and detailed world of golf!

The Golf Club 2 will be released for Windows, PlayStation 4, and XBOX One on June 27th. Pre-order your copy now!

Crash Bandicoot N. Sane Trilogy will be released on June 30th, and you can pre-order your copy right now!

That’s it for June everyone! All of these titles can be pre-ordered on our website, or visit one of our LDExperts in store on release days to get your copies!

Previous Post: How to Make a Grad Survival Kit

Next Post: Enter for your Chance to Win our Take your Lashes to Paradise Giveaway